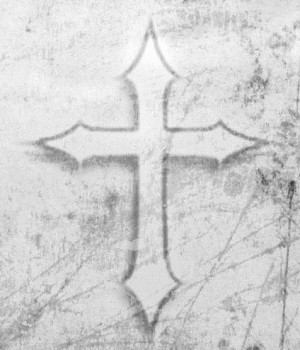 Jeffdls took the opportunity to do an interview with Robert Bekić, the man behind the Croatia band, †(Kriz in Croatian or Cross in English)

Thanks for agreeing to do an interview with us at Untombed. To start off, tell us how Kriz originated.

Thank you for the interest. It’s pretty simple, I’m making music for about 5-6 years now. And in all of my projects, I’ve always added some christian message into it. But it wasn’t always easy to spot so, I’ve decided to create a band that would openly and mainly be focused on Christ, spreading the Word, giving strength to our brothers & sisters, and of course to reach secular people and show them what Christianity is truly about.

How would you classify the music of Kriz?

I’m not really a fan of categorizing art but, I think that my music is a mixture
of funeral doom metal & ritual ambient. So, all in all it’s very experimental and dark if you’re not used to this kind of extreme music.

What’s the Christian metal scene like there in Croatia?

To be honest, I’m not too familiar with it, but there are/have been some awesome christian artists e.g. EffaTha, Amen, Hope etc. There obviously is a christian “scene” but it’s not really present (at least that’s what I know). I’m sure if I’d dig deeper I’d find some cool bands but, right now that’s all I see here.

What bands and/or artists are influential to the band?

What is your music trying to express to the listener?

It differs from song to song, there are songs that deal with inner struggles, insanity, depression, pain, love, God, darkness, light etc. I make music about themes that are important to me but, I also want this music to give strength to others, that feel very negative or are struggling with something.

My music is very dark but it’s here to spread light. I know it won’t make sense to most people that have never really been through some very hard crisis, but to those who thought about giving up, to those that have experienced horrible things, to those that are full of negativity..this will make sense. I mean, the feeling that this kind of extreme music gives to a person is like a relief. You can hear that – “You’re not the only one that goes through hard times.”  And it will give you some new reasons to think about how you should handle things.

Now, there are bands out there that will say “yeah go kill yourself, it your life” or stuff like that, and that’s something I don’t want with “†”. I want them to understand that there’s another way that doesn’t lead into destruction but, it gives you power and makes your life worth living again.

What do you feel is the biggest obstacle that Christian metal has today?

I think, that most christian artists of today have a big problem dealing with people that aren’t Christians. Most of them want to help them but fail at the first step, and that’s having a real conversation. I’ve seen it too many times, secular people bashing Christians, Christians bashing back . . Christians helping Christians and secular people helping secular people. And what do they achieve? Nothing!

That’s something I want to be different with “†”, most of my listeners are either anti-religious, pagans, atheists, agnostics and they’re all able to say “I don’t agree with your believes but the music you create speaks to me” and that’s the first step of changing something. At least I think so. I respect & love them all but what does it mean if they won’t talk to you? To make a long story short, I think we should make Christian music for non-Christians and communicate with them more respectful and patiently.

Where can people hear some of your music?  Is it available for download or on a CD?

My first demo is available for free download on my websites. The re-release of it and the new 8-way split album with A.H.P., Deep-pression, Gamnad737, Müldeponie, Thanatos, Valtiel & Vintered is available on CD and can be ordered directly from me. Also a song that I’ve donated for the Ed Barnard charity compilation “Doommantia Vol. 1” can be listened on “doommantiavol1.bandcamp.com“.

You can read it it all on my official websites.

The first full-length album “Surrounded by evil (fulfilled with Love)”, the album is almost finished. I’m just waiting for a guest artist to do his part and then I’ll search for a label. Also, a official video is already recorded and I want to use this opportunity to thank “Armath Sargon” for helping me create it.