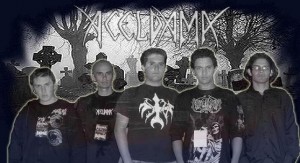 Costa Rica’s own Aceldama was kind enough to talk with me about the band and the album. This Death Metal band is an incredible band please check them out.

1. Thanks for the time. Could you introduce us to Aceldama?
Aceldama born in March 2005 in San Ramon de Alajuela, Costa Rica, as a project of Death Metal with a lineup of five members as Dixon, Jessica, Stephen, Gabriel and Cesar at the age of 20 years each, through many trials and sacrifice was gradually consolidated in the local scene and participating in different concerts in Costa Rica looking for the most bitter and extreme death metal sound of old school with certain dyes mainly Grind the first songs we did.

In 2006 we recorded our first demo “Victimas de la Muerte” which was limited to a few copies distributed in different parts of Costa Rica, Ecuador and Mexico. In 2007 we recorded our first EP titled “Sepultados en Tinieblas ” of which only 25 copies were distributed in different parts of Costa Rica. In 2007 the band split from guitarist Steven Barboza to make way for Ricardo Varela who is now part of the line-up. And now is the only guitarist in the band, we are in the process of recruiting a new guitarist.

Primarily the Goals we aspire to Which Are the engine That Makes us work very hard to record. When we started we did not dream to have a CD or video, much less go out and play in other countries. But the band has taken a course more that has professional Help us grow as musicians and as Children of God.

3. How did you get signed to Eirene Records?

I (Gabriel, Bass), for a few years have known Abraham Quishpe from Eirene Records, with whom I trade music for a couple of times. When we released the first edition of the album “Melquisedec” I told him “I do not like the arts and printing of the final work. He offered me to sign with Eirene Records, I talked to the guys in the band and we all agreed, that was how Aceldama became part of the great family of the label.

4. Costa Rica seems to have a big metal scene are there a lot of Christian bands there? How are you accepted by the Secular crowd?

In Costa Rica Aceldama is the only Christian extreme metal band, the other Christian bands are more inclined to genres like heavy metal, thrash, gothic, hardcore, etc.

5. What are the general lyrical themes in you music? And why the medical motif ?
Our main theme is a critique of the vanity of the man who clings to earthly things and do not want to recognize the need for God in your life. What apparel represents nothing really ha ha, but we like how it looks in uniform, a little crazy.

6. With the Melquisedec you released your first full length album. How are the sales doing so far? And what does the name of the album mean?
Sales have been pretty good, thank God, the disc has been distributed in many countries in Latin America, North America, South America and even in some European countries. Abraham “El Patriarka” has helped us a lot with Eirene Records.

The name Melquisedec means King Fair, which for us is God, the King of Kings who rules with divine justice.

7. What does the art work on Melquisedec represent?
Art represents many souls climbing some steps walking to the king seated on his throne and judging those who come to the throne, left above is the sky, right down to hell.

8. Mundo De Muertos, Salvador De La Opresion and Destruccion Para Este Mundo are all three absolutely brutal songs. Could you tell us what those songs are about and what inspired them?
Mundo de Muertos is a song that talks about the vain things of this world who are already dead but often our human eyes we see them as they had any importance and we call good in this world of death.

Salvador de la Opresion is a message of encouragement for people who think their problems are stronger than them and have no alternative but to die, we present a merciful God through this song.

Destruccion para Este Mundo talks about what will happen in this country when judged by God and things are destroyed by his anger, revenge of the Lord.

9. Do you play a lot of live shows? Any shows planned in the USA?
Recently we played in several concerts in countries like Mexico and El Salvador, there are still two dates, one in Nicaragua and one in Panama, a break after that, new video and then toured South America to appear in October this year.

We thought about playing in USA, but unfortunately we have contacts and we have to make the process of acquiring a visa and money second trip, our main goal is going to play at the CornerStone.

10. Is there a new album in the near future?
Of course, we are composing new music with new influences, we are leaving behind a stage where our music was more towards the death metal old school, what we want now is to bring the band to a better music, more focused on the brutal death metal style like Severe Torture, Encryptor, Disgorge (USA), we start recording in May of this year and complete by November or December, we want a stronger and more professional sound, also work in all details from art to photos, but mainly to bring a message of hope to people throughout this work.

11. Thanks again for the time do you have a final thoughts for the fans?
We do not promote religion nor churches, our message is clear and God is the way and the only one who can find real hope, thanks to all who have supported us and who believed in Aceldama, all people of Costa Rica, South America, Mexico, North America, Germany, Belgium, Slovenia, Philippines, Thailand and many countries which have supported us and have shown interest in our work and thank you for the interview,(I’m sorry my English is not very good).

Interviewed by Larry Versaw for Untombed.com

Start children off on the way they should go, and even when they are old they will not turn from it.
Proverbs 22:6