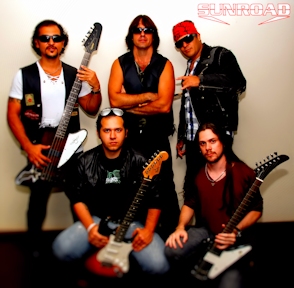 It has been 3 years since Brazilian metal band, SUNROAD, released their last album: LONG GONE.  Dale from Metal Pulse had a chance to catch up with Frederico Mika (FM) to see what they’ve been up to and discuss their upcoming release.

I know Sunroad has been around for a while, could you tell how you got started?
– Fred Mika: Sunroad started in Ago/1996 when my cousin, Danillo Vee, an acoustic guitar teacher called me to form a rock group. By the early days we used to play covers of our influences groups such Scorpions, Led Zeppelin, Uli Roth, MSG, UFO, Van Halen, Triumph and more like this. In 1997 we started to compose our own material despite the fact in that year, Danillo Vee quit the band.

How did you come up with the name Sunroad?
– FM: The band was originally named Baptized by Aliens but one year after, we decided to change to something positive.. Sunroad was taken from to Uli Jon Roth (ex-Scorpions) previous band, Electric Sun and Dawn Road. When I got converted in 1999 the name seemed to fit like a glove.

Is Sunroad working on any new music? If so when could we see a new cd?
FM: We’re actually recording the guidelines for our next album; Carved In Time, the seventh one (including the EP and the collection) and it will be release by November or early December

What is Sunroad mission?
FM: By the early days we wanted to keep in the traditional hard n´heavy school because we felt in the nineties most every band was playing alternative rock. Then 2 or 3 years ago, as I got converted deeply into Christianity, the lyrics started to reflect the ethical way of life. We began to look for inner and reflexive messages and we wanted to support helpless children, woman and animals around the world with page links to connect our fans that share a mutual view and interactive actions.

What would you like for Sunroad fans to get out of your music?

FM: A positive and deep view of reconciling our human internal perceptions of God in the face of a modern world. Also a message of ethical ways and the right of abandoned people and animals

What do you think of Christian music scene these days?
FM: In Brazil when you talk about Christian music to people outside Christian music, they think of traditional gospel music, but the growing number of dynamic groups has been increasing in several directions. I mean, today, you can find Christian groups in all styles, pop rock, heavy metal, reggae, soul, blues, funk, etc, etc. There’s no excuse on hearing some your favorite style without hearing some Christian group. In the early days, there wasn’t this kind of selection and diversity within Christian music. . It’s easier today, Thanks be to God.

How do you feel about sharing the stage with secular bands?
FM: Many times the problem is not on the stage, but rather, in the dressing rooms or backstage. We have heard and seen many things that we don’t approve. As possible we talk with them about the other side and a more positive way of facing things, but we’re not radicals ones. When it’s not possible to talk with them; we keep our faith and concentration and do the best we can.

Thank you very much for your time Fred, any final words for our readers?
FM: Reflexive thinking and actions are important in all areas of life today, especially in a world with global hyper-connected media. If you’ll seek very deeply, you’ll see that God gives all the answers. In this way you’re transgressing without aggression.
Thank you Dale and to all the goodwill people. PEACE to all and classic rock lives forever!