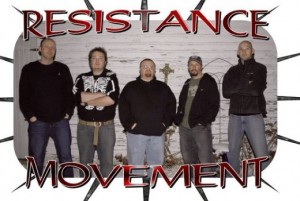 Thanks Guys for taking time out of your day to interview.
-Thanks for having us; we are really honored to be able to do this interview with you.

How long have you all known each other? How did you meet?
-Well, the drummer, Jason Foley and the bass player, Theo Whittington, have known each other for several years. They played together in a band back in the mid to late 90’s. Jason and Theo got back together in 2007 and started playing again, but at the end of 2010, Jason was going to move away so, Theo answered a Craigslist ad from a guitarist wanting to form a Christian metal band. Ryan Flaugher, our guitarist, had also answered the ad and before the band had even met, or completed the line up, they had agreed to play a show in the next month. So, Ryan contacted a friend in his church and he put us in touch with Keith, our singer. The last piece of the puzzle came together when Jason decided not to move away and decided to join the band also. The band spent a lot of time practicing in January of 2011 and wrote some songs and then played a show in February.

Lets talk about the name of your band. What’s the origin of the name Resistance Movement?
The name was originally the idea of the bass player, Theo. He had been using it as his Myspace name. The meaning behind the name actually comes from a desire to resist any and all pressure to conform to the world. As Christians, we believe we must uphold the truths of the word of God and stand firm and “resist” the temptations of the world. So, Resistance Movement is about an attitude and a commitment and we encourage our friends and fans to join in the movement!

What type of music does the band play and how do you describe your music to people?
-This always seems to be one of the hardest questions for a band to answer. Each one of us has so many different influences that contribute to the overall sound of the band. The closest thing I could describe us to is to take Pantera, Demon Hunter and Living Sacrifice and throw them in a blender and then sprinkled a little bit of Black Sabbath over top of it, then you would have Resistance Movement. The closest description to a style would be the new wave of American heavy metal.

Who writes the songs, what are they about?
-All the lyrics are written by our vocalist, Keith Martin. As for the music, everyone in the band contributes songs. Usually, someone will come to practice with a song and then the rest of us will pick and prod at it until we have molded it into something that we all like.

Are you working on any new music?

-Yes, we are currently writing new material for our next album. We released an independent album, The Great Constant, back in October of 2011 and we feel it is time to start working on our next album. The next album is tentatively titled “Collapse” and we have worked on a handful of songs for it. Our single, Gun Muzzle, has already been recorded and we are shopping that to various labels, hoping to find one to back us with the new album release.

I just got a copy of your new single a few weeks back, ” Gun Muzzle,’ and having heard it myself, I can say its a great piece of music.
-Thank you so much for the compliment. The song was actually the brainchild of our guitarist, Ryan. He brought it to practice one day and we fell in love with it. The funny thing is, after we had completed it, it was actually close to eight minutes long. So, needless to say, when we went in to record it, the producer said that it was just too long to be a single and he worked on it to bring it down to the version that we have now. It was hard to see so much of the song chopped away, it was our baby after all, but in the end, we are really happy with how it turned out.

What are your rehearsals generally like? Do you have a set time each week in which you practice?
-We typically rehearse once a week and a typical practice involves, practicing some of the songs off The Great Constant and then working on new songs. Along with those two things, we really like to pick on each other. This band is so much like a group of four brothers, we are relentless with each other, just like brothers, but we love each other, just like brothers.

What has been your biggest challenge as a band? Have you been able to overcome that challenge? If so, how?
-Our biggest challenge as a band has to be finding the right people to market ourselves. Being a metal band limits your audience and then when you throw in the fact that we are a Christian band, it limits your audience even further. As far as overcoming it, well, it has been hard and it is still a challenge, but we trust that God will take us where He needs.

How can fans-to-be gain access to your music? Do you have a website with sample songs or a demo CD?
-Oh, we are so glad you asked that question. We have various ways for people to hear our music and to stay in touch with what we are doing. We have streamed our new single, along with samples of every song off of The Great Constant, onto Facebook and Reverbnation. MP3’s of our first CD are available for purchase on Reverbnation, too and we are going to be putting them on Itunes soon. We have hard copy CD’s of our first CD available also, locally. Here are some links to our sites:
–RM on Facebook    and   –RM on Reverbnation

But those who hope in the Lord will renew their strength. They will soar on wings like eagles; they will run and not grow weary, they will walk and not be faint.
Isaiah 40:31