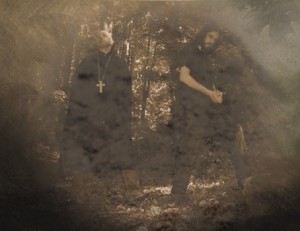 I recently caught up with Matt Brand from Swiss doom metal band Pÿlon. Greetings, Matt.  I hope that you are doing well.  Thanks for taking the time to do this interview for Untombed.  How did the band originally come together?

Hi Jeff! Matt here! Thanks, everything’s fine with us! We are happy with the new album and it seems that some people around the world also like it… so it’s a good feeling.

About the band: Pÿlon was formed in 2002 by me and former drummer Tinu who left the band after Th’Eternal Wedding Band album due to musical differences. Originally, I wanted to make more into grunge/stoner, but deep inside I’m a “doomer” so I always played songs back in that stile… and the other band members liked it, so I wrote more songs in that direction. I already had a doom band in 1996/97 but this band didn’t achieve any demos or good songs.

Actually, I only wanted to play guitar and not to be the lead singer. And we had a lead singer in the beginning, but also lots of trouble, so I fired him.  And we had many other musicians who came along in the band and left it again… the only one who stayed is Jan… he has been with me since 2002 – he came 6 months after the band’s formation. The intention behind Pÿlon was to release an album every year, because I have been playing in bands for over 2 decades and never something came this way, which was my dream! So I decided to create a band without compromise.  Most musicians who came along only wanted to play live or cover songs. So they left the band very quickly!

That’s also why most of the songs are already very old in fact… some ideas have been going through my head since over 20 years!! And I didn’t want to play them only in my head!! Haha.

This is the reason we also work with lots of session musicians, including on Armoury of God because it is more easy to ask somebody to play a solo just the way you want it and let him go after, than to have “permanent” musicians around you who just wants to make their own sound..! That’s why we are, in a certain way, more a project than a band… but right now we have a very good permanent drummer (Andrea Tinner) and a new rhythm guitar player (Andre LaMorte, he didn’t play on Armoury of God)

Who are some of the bands that have been influential in Pÿlon’s sound?

My young brother, which I played with for over 6 years in different bands when we were young, said to me 23 years ago “Matt, you play guitar like Saint Vitus”… ok, so I think one the influence is for sure this band! But they are tons of bands that influenced me – early Black Sabbath (off course…) Count Raven, early Iron Maiden, Manowar, Trouble, Nemesis/Candlemass, Led Zeppelin, early Cathedral, Amebix, Deep Purple, Paul Chain, Death, Entombed, Leviticus, Deliverance, Running Wild, Metal Church, Celtic Frost, Seventh Angel, King Diamond and a lot of bands from the 70’s and the 80’s, I could make a list of one hundred more bands…

I think the fact that we are sounding like we do is not created by will, it just “happened” that we are so close to old Sabbath or Candlemass. If I could play guitar like Dave Murray and sing like Bruce Dickinson we would probably sound more like Iron Maiden!! Haha!

Is it easier being a trio or is it more difficult musically?

I think it is the best line-up I could imagine! Right now we are 4 again and it makes some things more difficult because there is one more band member who is giving his opinion… and this is not always a help. Haha. I’m not always a cool guy when it comes to deal who has to play what!

Being a trio is easy – the drummer does his job, Jan his bass parts and I the guitar, there is none who have to show the other what is better to play, with 2 guitars it’s already more complicated… but right now I focus more on the vocals parts, because I want to be better/different on the new album…!

They are not lots of Christian bands in Switzerland. Maybe 10 or so… I don’t know exactly.

But there are some Christian musicians playing in bands who are not focused on Christianity. I don’t think that Switzerland was ever a country with lots of white metal bands! But lots of fans for this music!

Actually not all band members in Pÿlon are Christians.  I am, Jan is very interested by Christianity and the Bible but wouldn’t call himself a Christian. Andrea is Atheist and the new guitar player Andre LaMorte is Christian.

How does your faith affect your musical life?

This is hard to explain, I think that music is a gift from God. And that God is helping me creating the songs. In the past when I wasn’t a Christian I wanted to do it all by myself and it didn’t work/sound the way I wanted. Since I am a Christian I can really play the music I want and I am very satisfied with the result! So I really believe that God helps me believing in what I am doing and gives me satisfaction! This is a good feeling. I am very satisfied with the way how Pÿlon sounds. Even it is not what many would call “perfect”. But for me it is!

You recently released Armoury of God, which is part of a trilogy along with Th’ Eternal Wedding Band and Doom.  How does the new album fit in with the previous releases?

First, it has the same “theme”: Death, our personal ending, that everything is gone one day. Second, it’s the songs, we wrote and made demos of many songs between 2004-2006 so we couldn’t put it all on Th’ Eternal Wedding Band, so Jan had the idea of a trilogy… but right now we see that it should had be a… quadrilogy… because we have still lots of songs from that period that didn’t take place on those albums! So I decided that we will (one day) release a fourth part for the “trilogy”… but before that we want to work on new songs already now which are different from those “old songs” and release 2 other albums with material that I am writing now.

Was it difficult making this album?

No, I think it was easier than Doom, because Andrea, the drummer, promised to stay until the end! So we hadn’t to seek drummers all the time!! Haha. And I had more knowhow about mixing and how it has to sound. On “Doom” I had to experiment a lot! Even if the result were very good for me!

What do you expect the listener to get out of Armoury of God?

That they like it as the liked Doom! But I think that some listener will expect that it sounds more 70’s and I make it a little more “modern”. I want to create a different sound on every new album. I don’t want to repeat myself. And maybe some fans would not like this! The drumming from Andrea is more technical than all we had before, more “metal”.

On the next album we want the drums without double bass drums, Only single bass drum on all of the songs.

On the other side, we still sound “underground” on Armoury of God and I think that people who like us, like this sound! I don’t want to sound “modern” or “fat” like lots of other bands. I want to keep this natural feeling in our music.

No, not really. We like to make instrumentals and some riffs just don’t fit for vocals so we make them without and add some solos on it, and here we go! And the keyboards songs were made by Jan or myself when we where alone in the studio and had to free some emotions.  Most of them are very spontaneous songs. We have an idea, record it, and put it on the album! And I think it gives to the album space to chill a little bit more! Most of our fans like those songs!

How do you write your songs?  Is it a collaborative effort with everyone adding their ideas?  Or does someone write one song and someone else writes another?

The most vocal lines and riffs come from me alone. A few songs and some riffs are from Jan. but we arrange them all together. But most of the time I have an idea that I want to do and the others have to follow… yeah, I know, I am a bad guy… I founded the band to play my songs, but if someone has a good idea too, I don’t have any problem to play it. Only when someone shows a song which is bad in my eyes… then I have to discuss a lot with Jan on why I don’t want to play it!!

I am making little demo versions of the new ideas I have and send it to the others, then we come together and try to make it sound good! And most of the time we get a good result, but I also throw a lot of songs away…

In the liner notes of Armoury of God, it’s mentioned that the next release will be on vinyl only.  Is there a particular reason for this?  And when can we expect this to be available?

Yes! I always wanted to release my albums on vinyl, but this was for over 20 years ago… now in a time when CD itself is becoming a thing that people don’t want. So it is time to do what I always dreamed of!! And… we need only 40 minutes of music.  This means the new album will have only 5 or 6 songs!

We hope to be finished in the summer of 2012 with everything – mixing, mastering, and the album in our hands! But only the Lord knows… we’ll see.  We are already playing/arranging 5 new songs!

Any final words for our readers?  Or any requests for prayer?

Well, thanks for all of the folks who are listening to us! We really are thankful for that!! And a request for prayer could be that people may be touched by God to think about their lives and the afterlife when they don’t know God already!

Thanks again for doing this interview.

Thank you Jeff for the opportunity!

Know therefore that the Lord your God is God; he is the faithful God, keeping his covenant of love to a thousand generations of those who love him and keep his commandments.
Deuteronomy 7:9