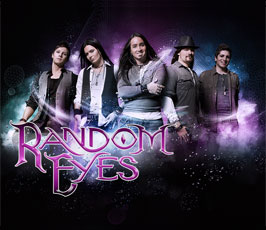 Random Eyes is a Finnish heavy metal band that has two releases under their belt – Invisible and Eyes Ablaze. As they’re working on the latest album set to come out later in 2011, I was able to get some time with them to do an interview.

Thanks for doing the interview. Most of the band members have been in other bands throughout the years, such as Essence of Sorrow, Mehida, Wingdom and Cruciferae. Do you consider any of them to be your “main” band or are they another facet musically?

Voitto Rintala (bassist): -Random Eyes has been my main band since I joined it 6 years ago.

Rolf Pilve (drummer): I work as a freelance musician, so I don’t really have a main band. Usually if I am working with certain band for a certain period of time, it’s kind of my main band at that moment.

Christian Palin (vocalist): The main band is Random Eyes, essence of sorrow was just a little project in my life, sometimes if feel i can do something else just for a moment and many times i write different music so thats the reason for side projects. In the end my call is to stay in Random Eyes as leader and songwriter. My band, my child.

How do you come up with your songs? Does someone write all of the music and lyrics or is it more of a group project where everyone gives their input?

Voitto: Christian is the main composer and lyricist, but the method of working differs from song to song. On some songs he might compose everything and some songs start by someone else having an idea or whole structure for a song and then we mold it together into a Random Eyes tune. In the end all the songs will have some spice added by each of the musicians.

Rolf: Christian writes most of the music, but we have this democratic thing going on, where everyone can bring out their own style to every song playing wise.

Christian: Well most of the time I write the songs and lyrics at home, my vision is clear. Then we arrange the songs with the band. In lyrics I prefer to not ask the guys. Why? My life is such a mystery and as well my conception of the spiritual atmosphere is really complex.

How did you become part of Random Eyes?

Voitto: I was very much a fan of their music and I got to know Christian through mutual friends. When an opening for a bass player in Random Eyes came, I didn’t have to think twice.

Sami Rönkkö (guitarist): Christian contacted me last Summer and mentioned that there might be some line-up changes in Random Eyes. Few weeks later I went to Jyväskylä with my guitar for a meeting and that’s about it. Here I am, shredding and rocking in Random Eyes.

Karim Elbanna (guitarist): I had heard Christian sing on the Finnish installment of The X-Factor. Some months after the competition, I saw him downtown and went to talk to him. We started talking about music and I showed him some demo songs I had recorded with my previous bands. Some months later he rang me up saying that Random Eyes was looking for a new guitarist. That’s how things got started.

Rolf: I did a gig with Random Eyes years ago and I helped RE to do some preproduction tapes last fall as a session musician and bit later I was asked to join as a full time member.

Christian: I am the founder of this aforementioned Band.

Is there a reason why all of your songs are sung in English? Do you ever catch any flak from other Finnish bands, like VIP or Sotahuuto who only sing in Finnish?

Voitto: No, of course not. It’s just a different style and approach. English has always felt like the most natural choice for our music. Random Eyes has always tried to reach as many people as possible and aims for international success. Our band members also have a diverse background.

Rolf: I personally think that English is a universal language and it’s actually a main language in our band, so it feels natural to sing in English. Another fact is that if you sing in Finnish, it really affects your place on a music business.

Christian: Well, I’m half Latino . . and Finish language is not the best idea for me, and of course, we’re going to do international music. For the “moment” English is the way to the world.

Who are some of the musicians and bands that have influenced you throughout the years?

Voitto: My hard music appreciation started with Metallica and Tourniquet. I like different metal styles but it all points toward the more melodic and progressive. Dream Theater, Riverside, Darkwater to name a few.

Sami: I have always listened to guitar virtuosos like: Yngwie Malmsteen, Steve Vai, John Petrucci (Dream Theater), Michael Romeo (Symphony X), Joe Satriani, Greg Howe etc. Yngwie is the main reason I picked up the guitar in the first place when I was a kid and started practicing night and day until my fingers did bleed hehe… I also listen to classical music and love progressive and fusion stuff.

Karim: Iron Maiden has always been a huge influence for me but I listen to anything from Children of Bodom to bands like Dokken and Ratt. As a guitarist some of my main influences are Paul Gilbert, Yngwie Malmsteen and George Lynch.

Rolf: I must say that most influental person for me is Frank Zappa. I have also been listening to a lot of free music lately, like Jim Black, Elliot Kavee, Fieldwork. My first reason to start playing was Nicko McBrain and Iron Maiden.

Is there a member in the band who’s a prankster or jokester? If so, what are some of the pranks/jokes that they’ve done?

Voitto: Naah, we are all a very serious bunch *TIRSK*

Rolf: I think that I am definitely one who does that. My humor is kind of sarcastic so it’s easy come up with some jokes.

Christian, is there any particular vocalists that you try to emulate?

Christian: Aww, well well . . if I have to admit then I’ll be really clear and honest. I try to sound like me. I hate to copy or sound like someone else.

Is it harder for you to perform in a concert or in the studio?

Voitto: I would say a studio because there`s always been some kind of tough deadlines that we’ve had to consider.

Sami: Not hard at all, I just love playing guitar so much. Concert and studio are two different situations environmentally, I demand perfection from myself in both situations.

Christian: In studio it’s harder . . . that’s the reason I don’t want people around my personal work. I get frustrated if it that happens.

Sami and Karim, you both are two excellent guitarist who lay down some amazing licks. Do you play off of each other while in concert? Is there a bit of competitiveness from time to time between you two?

Sami: Well, I’m the main lead-guitarist in Random Eyes, and I forexample played all the leads for the new upcoming album. Karim is an interresting and cool guy to play and jam with. Talented fellow.

Karim: Naturally there is some friendly competitiveness between us. Sami is an amazing guitarist and I really enjoy playing in the same band with him and hearing his ideas.

Voitto, the rest of your bandmates have played in mostly power metal bands. You’ve been a bit more diverse with death metal bands like Renascent, Recidivus and Cruciferae. Is one style easier for you to play than the other or are they similar?

Voitto: The style doesn’t matter that much, the speed is more crucial or how progressive style the band plays. If I make a song (or bassline) myself, it’s always easier to play even if it sounds very difficult. Random Eyes`s style fits me perfectly because I like to give my all at a live performance and mosh away but still have plenty of more progressive parts where I have to concentrate more on the playing.

Has there been any talk of reviving either Recidivus or Cruciferae?

Voitto: No. But I still have some songs I composed then (long ago, heh) that I consider very good. I will do something with them sometime. I recently got recording software myself so I will do alot of composing in the future.

Rolf is there any drummer out there that makes you say “Wow, I want to play like that”?

Are you constantly adding pieces to your kit or do you mainly just tweak what you have?

Rolf: I don’t think about gear that much. Basically I always play with same kind of setup including bass drum, tom, floor tom, snare and couple of cymbals. If I change something, I just take something away from my setup. Lately I have played some gigs with just bass drum, snare and floor tom.

How is the recording for the new album coming? Is there a tentative release date for it?

Christian: The new album is almost ready, in a couple of weeks we will be done. We will publish the release date in the end of March.

Sami: The recordings are going great! We’re almost done. Next week me and Chris will head to studio for few days, and record the final vocal parts and few last lead- and acoustic guitars. Then all is finished. The album will sound really amazing!

Rolf: Almost all recordings have been finished and the single is already mastered!

Once the album is complete, will you be playing more shows? Are there any plans for any shows outside of Finland, like at NordicFest or Elements of Rock?

Rolf: It would be awesome to play some more shows in the future. There are some big plans for touring as well, but nothing is confirmed yet.

Christian: I hope so. I would love to start gigs as soon as possible! We wish to get in to the good festivals.

Is there anything in particular that the readers of Untombed can pray for you?

Voitto: Music is a tough business but we just want to continue do what we love and create something new.

Rolf: To have a success with our third album and have our touring plans to happen.

Christian: Yeah, you can do it of course. My band is important and I want to succeed in life to help people with our music. I think that’s a good thing to remember.

Any closing comments for the readers of Untombed?

Sami: Thank you for checkin’ out this Random Eyes interview, rock on an’ see ya on tour!

Christian: Have a nice day, stay strong, and don’t give up even if the whole world forsakes you. There is still Love that carries you over the sea of lies.

Rolf: Rock on and see you on gigs!

For you know that it was not with perishable things such as silver or gold that you were redeemed from the empty way of life handed down to you from your ancestors, but with the precious blood of Christ, a lamb without blemish or defect.
1 Peter 1:18-19