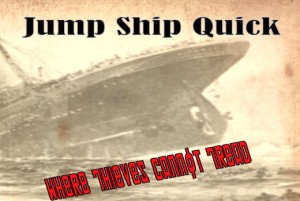 Christian punk has seen lots of great bands from all over the US – One Bad Pig & Lust Control from Texas, The Crucified from California, The Lead from Florida, Grave Robber from Indiana and now Jump Ship Quick from . . . Colorado??? Really??? Yes, really.  And these aren’t just some teens that decided to start playing a bunch of punk covers.  Jump Ship Quick has some veteran players (from hardcore outfit Focused as well as Straightarm).  So you know that they can play.  But how well can they play punk?  Well, I can tell you that they know how to play punk and play it well.  The style I would say that they are is old-school skater punk – melodic with still the punk edge.  And the vocalist sounds a bit like Five Iron Frenzy’s Reese Roper, which is actually quite funny considering three things.  First, the band lists FIF as an influence of theirs.  Second, the album was mixed and mastered by Masaki Liu who’s credits include The W’s as well as FIF.  And finally, because the producer of the album is Leanor Inez Ortega Till (a.k.a. Jeff the Girl) from FIF.

The album starts off kicking with “Through The Ears” which is fast and furious with the drums pounding away and the guitar chugging in full-speed-ahead mode.  The lyrics are definitely in-your-face.  A great line from this song is “Today’s latest craze, tomorrow you’ll be replaced, corporate hunger for change will never satiate.”  And as with skater punk, you get some nice guitar solo work as well.  “Mask on Greed” starts with a clip from some telethon, obviously for some TBN-like broadcast.  The music is a bit more technical and heavier while the lyrics are still very up-front – “You put the Christian mask on greed”.  “He Must Increase” is a bit slower and sounds like it could be an Altar Boys song.  The song really shows the real musicianship of the band with the great melodies and harmonies while maintaining that punkish edge.  Things pick back up with “Here Comes The Clowns”.  The groove laid down at the start of the song is tantalizing.  The song deals with drug addiction and its destructive power.  I’m really impressed with the gang vocals on this song – it’s never as easy to do as it seem but they do a great job here.  “Not My Fault” starts off with a great bass riff because it kicks into a mid-tempo groove.  This song has some more great lyrics – “I’m only responsible if the lottery says I won”.  “Hollywouldn’t” kicks the speed into overdrive again railing the Hollywood industry and the immoral lifestyle that they push.  “As We Overcome” is an appropriate song following “Hollywouldn’t”.  It calls on us to remain true to Christ in our lives – “pursue faith, hope, love”.  “Killing for Convenience” is another in-your-face song by the band regarding abortion.  “Abortion rights – killing for convenice . . . another voice silenced, where’s the justice” the vocalists screams.  The breakdown in the middle of the song is well placed.  “In The Guise” is a fast-paced political tune calling out “holier-than-thou” politicians who abuse their constituents for their own gain.  “Where Thieves Cannot Tread” is another mid-tempo song that sounds something that Six Feet Deep would come up with – a really nice & catchy tune.  And it has some great lyrics as well – “The earth has been filled with sorrow but we have hope for tomorrow”.  “Clueless But Not Hopeless” slams it back into high gear.  And just like “Killing for Convenice”, it has a great breakdown in the middle of the song.  “If Only . . . .” comes up right behind at full speed.  This song deals with people who think that their works (and money) will save them in the end.  “I Defy Your Violence” starts off with another great bass riff as the rest of the band slowly joins in before going full guns.  The way that the vocalist runs off his words reminds me a bit of Mark Salomon from The Crucified.  “Cattle Prod” is another skater punk full-blast tune.  You can almost see a mosh pit going wild when the band plays this song.  “My One True Hope” is a call out to God – “Father I choose to run to you, you’re my one true hope – make me new”.  This song has some great hooks.  “Sun Sets” closes out the album and it’s the longest “song”.  It’s actually the main song “Sun Sets” with a bonus track “hidden” at the 7:43 mark.

For a debut album, this is great.  But then Jump Ship Quick is made up of some veteran musicians.  I think we can definitely look forward to more great music from the band.

You, Lord, reign forever; your throne endures from generation to generation.
Lamentations 5:19