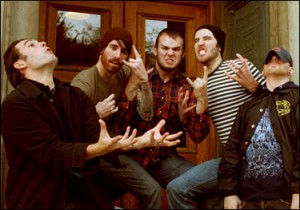 With a highly anticipated album coming out next week (7/12), a new record label, and being on one of the biggest tours of year we decided that it was time to sit down and talk to Tommy Green, vocalist of Sleeping Giant about “Kingdom Days In An Age of Evil”, their past relationship with Facedown Records and their decision to work with up and coming Ain’t No Grave Records (ANGR), Scream the Prayer, and their faith.

1. How did Sleeping Giant come about as a band?

We were just friends from the scene and church that started a band ya know. I told the dudes that all I was Gonna sing about was Jesus cause that was all that mattered and I was functioning like a pastor already so they said GO so we went off and preaching.

2. How did the initial signing to Facedown happen?

We were friends with JD and Virginia for years and JD said he felt line God was using our band and wanted to partner with our ministry an out out a record so we said yeah. Did a 1 record deal with an option for another and that was it. Signed it in the backseat of my friend coreys car and that was it.

3. “Sons of Thunder” was more overtly melodic, and had a less “sludgy” sound than it’s predecessor, “Dread Champions of the Last Days” – was that a conscious shift, or did it just evolve naturally during the songwriting process?

More the direction and focus of our band. We were really drawn to explore a  different mire developed style of heavy praise.  Like our style. We are still exploring how to build that connection between the sound in us and the sound of worship that the body of christ is more familiar with, without losing what it is God has put in our hearts.

4. Sons of Thunder was released on vinyl – was that something you guys wanted to accomplish, or just something that happened naturally through the growth of the band and your exposure in the market?

We were stoked to put out a RECORD for real. It was something we were really glad to do. Vinyl is like baseball cards for hardcore kids ya know.

5. What prompted the decision to not work with Facedown Records any longer?

We finished our contract and that was it really. I think both JD and us felt like we wanted to explore different options for the future so we moved forward.

6. How would you characterize the sound of the new album “Kingdom Days In an Evil Age” as compared w/ the previous 2 releases?

A really good blend of where we were who we are presently and where we want to go in the future.

7. How did you guys get connected with Ain’t No Grave Records, and what would you say is the most positive aspect of working with them?

Good relationships with them as people and freedom to move in directions we choose. We have a similar vision for the ministry aspect of the Band and have the capability to reach out musically to a diverse audience with a Ton of different avenues to work through so really it’s a great fit for us and a great time to be apart of the Label.

8. The deluxe version of the new album is reportedly only available via F.Y.E. stores – was that a label decision, something the band was involved in, or both, and how did you choose which tracks became the bonus content?

Ya know I don’t know if that’s true but I’m really not sure so prolly something the Label worked on. The band just put together the songs and I think we wanted a blend of all styles on each different version so that was how we divided up the different versions of the record.

9. What has the Scream the Prayer tour experience been like so far this year?

The tour has been awesome and HOT and fun. We have seen really notable miracles and peoples lives are being touched and transformed on a daily basis.  Life changing encounters with God, victory over struggles and mindsets that are holding people back are taking place because of the power of Jesus Christ and the bands are seeking God together daily in community so it’s a great tour.

10. Any final comments, shout-outs, praises or prayer requests for fans?

To the Lord Jesus Christ who is the Reigning Champion over all of our Lives hahahaha Thank You My King!!!!
To all of The Supporters of our bands and ministries-Thank you. Thank you thank you. None of these bands would really have any desire to move forward if it wasn’t for the people who pray for us and come to the shows and the die hard fans who come and support. We thank God for you.  Shout out to my kids and all of our families.   Also my wife is HOT. In one word for my wife- OOOWWWWW!!!!!
Muchos Love. Tommy and SG

You can pick up a copy of “Kingdom Days In An Age of Evil” from Divine Metal Distro.

Therefore, since we have these promises, dear friends, let us purify ourselves from everything that contaminates body and spirit, perfecting holiness out of reverence for God.
2 Corinthians 7:1