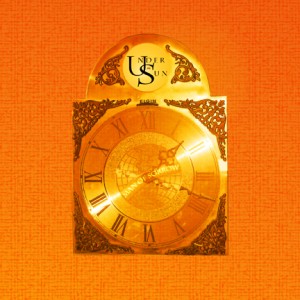 Under The Sun is a doom metal project with Mike Smail on drums (Penance, Cathderal, Pentagram, Internal Void), Dave Roman on guitar and bass (Penance, Humbucker) and Dennis Cornelius on vocals (Doomstone, Revelation, Place of Skulls).  I recently got in touch with Mike for this interview.

Thanks for taking the time to do this interview.  How did you start playing percussion?  Was there a particular percussionist that you wanted to emulate?

I started playing drums in school in 4th grade in the band. Drums usually become by default  the “cool” instrument to play since they don’t have guitar and I certainly wasn’t up for playing the trumpet or sax etc. I kinda had a knack for it and enjoyed it and started to learn the formalities in school. After a little while, my parents bought me my first kit (Christmas of 1979 to be exact!) and I started playing to my records as home. Kiss, Sabbath, Alice Cooper etc. My best friend, Brian-who was my neighbor started playing guitar and it all went from there.

As far as emulating anyone in particular-not really. I was more interested in the type of music as opposed to just the drummer.

Since you run a music shop, do you have any students come up and tell you that they have heard you on a Penance album?

Not really. A couple of kids, not students have come in and are familiar with some of my work.

Could you tell us how the idea for Under The Sun came about?

Well, after the demise of Penance and my short stint with Internal Void down in Maryland I kinda bowed out from music for a bit. Maybe I was a bit burnt out and fed up with things and I needed a job but couldn’t find one, so I focused my time on opening up my music store. Figured I’d create my own job since I couldn’t find one. I took the energy that I put into bands and looked at my store as my band. After a little while and I had things up and running, you start to miss it- the whole writing, creating and recording end of things. Dave had some time on his hands and was in between things as well. So I talked to him about doing a Christian record. It wasn’t really a band as it was more of a project since it was just him and I. In previous bands we both wanted to do something in that direction, but could never get everyone else on the same page so this became the perfect setting.

It took a while to find the right vocalist for the group.  Did you ever think that the album would never get done or did you have faith that God would provide in time, on time?

Yea, it did take some time. Originally, I had more of a heavier type of singing style pictured for it and tried to get Spice from Spiritual Beggars to sing on it, but that never materialized. Then, Roman had suggested Dennis as we’ve both known and liked him for years now since his inception with Revelation. So I got a hold of him to see if he’d do it and he said that he was interested, so I sent him a tape of the music but never heard back from him for several months. I figured that he changed his mind and wasn’t into it. So finally, I approached Butch to help us out which he agreed to thankfully. It’s not that I didn’t want Butch (Balich of Penance) to do it, but I wanted to try and sway away from the whole Penance thing as much as we could and throwing him in the mix made it even more just another extension of Penance. After a week or two, Dennis finally got back with us and said that he’d do it, so that’s what we went for. While it took the longest time I’ve ever had with a record, I really wasn’t too concerned about it as we weren’t under a time frame from a label or anything however frustrating it was. Like everything else, it all works out in the end.

Were the songs on the album “Man of Sorrow” ones that you’ve had for quite a while and have been waiting to release or did you and Dave work on them recently?

A lot were some older songs and/or ideas that we’ve had laying around. I think that most musicians lay their riffs down on tape and keep what they think are really worth keeping knowing that you’ll use it someday. This happened to be that someday. Some of those songs never made it with Dave’s band, Humbucker or with Penance, but we knew they were good none the less. The 3 songs not on the cd which will be on vinyl shortly were the newest, most current songs that we wrote during the process which wasn’t older material.

How did the song-writing go?  Did you and Dave collaborate on all songs with one person doing the lyrics and the other the music?  Or was it a team effort?

Yea, it was a collaboration. Dave had most of the riffs which we arranged into songs and I did most of the lyrics.

What do you expect the listener to get from the album “Man of Sorrow”?

Hopefully a killer album with a positive spin and that you can praise God and still be heavy.

It’s definitely a great album.  Was there a particular sound or style that you were aspiring to for this album?

Not really. It was more of what we’ve always have done. Doom metal crossed with Trouble, Spiritual Beggars, Sabbath etc……..the Christian lyrics were more the intentional angle. We definitely wanted a good mix of both mood and tempo-mellow and heavy in both the lyrics and the music which I think we accomplished. Not just one heavy sound the whole way through without any dimension.

The first song on the album – “Stride” – is rather interesting in that it has three sections to it.  Did y’all plan it to be that way from the start?

Yes. It didn’t come out as much of a smooth transition as we would have liked. We wanted the guitars to crossfade and overlap each other going from one to the other, but it didn’t turn out that way. We recorded it in 3 parts, but it became too difficult in the studio to make it sound as we would have preferred so we just left it as it sounds.

Both “Joy” and “Forgiveness” are a bit different stylistically from the rest of the album but are still artistically beautiful.  Was it easier or more difficult writing these two songs?

Thanks. Roman had those songs around for a while now, so it wasn’t a chore at all. It was actually probably easier because they’re more of a departure which made them a little more fun to do. I tried to match the lyrics to the upbeat or more happy mood of those two.

The last song on the album “Man of Sorrow” is completely spoken.  Was there a reason why you decided to have it like this?

That was all Roman’s idea. Trying to match to mood and theme of Isaiah with the message that Christ died for our sins which is heavy and solemn of what he went through for us.

I’ve heard that UTS will have a vinyl release soon.  How is that shaping up?

Hopefully we’ll have the vinyl release around summertime. Svart Records is planning on doing both the cd as well as the 3 unreleased songs on a double vinyl release. I’m very happy about this news.

What are the future plans for UTS?

Roman and I have started jamming again and are putting together some new songs. Not sure what we’ll do once we have them. We’ll probably record them and depending on how the recording comes out, maybe we’ll put them out as well. Nothing definite yet though as he’s been playing out more again with his band Humbucker and I’m always busy with running my store. We’ll just have to wait and see what shapes up.

How can the readers of Untombed pray for you and the other members of Under The Sun?

Pray the we continue to grow under grace with God and move more and more closer to Christ in faith and stay the course. It’s a hard path to be in this world, but not of the world. I could always use their thoughts and prayers to help keep my business up and running as well, especially in this economy.

Do you have any last words for our readers?

Thanks again for the kind words and I really appreciate the time and space for this interview and review. Peace, Mike Smail

Thanks again for doing this interview.

But because of his great love for us, God, who is rich in mercy, made us alive with Christ even when we were dead in transgressions—it is by grace you have been saved.
Ephesians 2:4-5