This interview is with Rob Perez of Visual Cliff. We will be talking about the new album they Just put out called “Collective Spirit”

1. Thanks for taking time out to participate in this interview. I hope all is well with you, my friend.
All is well. Very well actually. I have felt the Lord moving in and through a lot of different things that I am involved in and its been a very exciting ride this past year or so.
2. I see you have a new line-up for the new album, “Collective Spirit” . Could you tell us who the new additons are and what caused you to change it up?
When the Lord put the call back into my heart to do another VC album obviously I contacted the guys in the band and asked if they had the time and heart for putting out another disc. Only Shane responded with a yes. Unfortunately all of the other guys responded with work & kids as being the reasons they could not fully committ. It was a little dissapointing but I understood and I said ok Lord if you want this to be put out there please provide the players so that I don’t put out what would essentially be Bluesyndrome II. LOL Literally in about 12 hours I had a new band of committed brothers very excited and eager to be involved. I got to know Thomas Schuffert (drums) by having him as a client at my recording studio. I was blown away by his talent and diversity. We talked faith and music a lot and he became a fan of VC’s stuff and when I asked if wanted to join he jumped at the chance. David Michael and I have known each other for what seems like forever now but I meet him about two years ago when I was putting together a worship band for my church’s Thursday night worship service. Even though he is a kickin guitar player he was cool with joining that band on bass and because of the great talent that he is the bass playing was better than most dedicated bass players I have ever played with. Before even getting to know Dave he knew of VC and dug what we were doing so when I asked him to join the band on bass he was very excited to do so. As for keys, I was always a huge fan of Mike Florio. Mike’s solo music is awesome and he is a major player and a known keyboardist throughout the Christian prog scene. He has played with Randy George of Ajalon (Who has also played with Mike Portnoy of Dream Theater and Neal Morse) and Mike has worked with Matt Mendians and David Walliman from Glass Hammer. I knew that Mike heard of VC but was not sure if he was a fan. I sent Mike an email asking if he wanted to be involved fully expecting a no as a reply but to my surprise he jumped at it and was stoked to be on board. Again all of this transpiring within a 12 hour time span. The Lord is mighty! 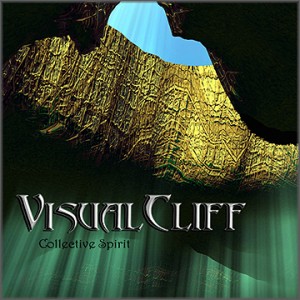 3. What are some of the titles of “Collective Spirit” ? Would you call this a concept album or a straight forward album or a little of both?
Some of the titles on Collective Spirit are “Bone From Marrow”, “Sweet Conviction”, “Exposed”… it’s a straight forward album with each song having its own meaning. If you really ponder the titles and then listen to the music (especially the instrumentals) you’ll get it.
4. I see Shane Lanikford from Orphan Project is singing in three of the songs in this project. He has been with you since the 2005 “Freedom Within”. I know Visual Cliff started out as an instumental band. What brought the decision to add vocals to the albums?
I became a huge fan of Orphan Project and Shane’s vocals and I always wanted to add vocals to the mix of instrumentals. So I got a good lawyer and went after him… LOL… just kidding. Its been great havign Shane inthe mix and I could not imagine doing a VC album without him.
5. Could you take us through some highlights of this album?
I’m sure all of the guys have different personal highlights but a few of mine are: I love how “Turning Of The Gears” came out as a whole. The haunting keys, Shane’s great vocal performance, the mix everything. I still get chills listening to it. “Shema” (which for those who might not know is a Hebrew word/phrase for “Hear, O Israel: the Lord is our God, the Lord is one,”) was another highlight for me. Again the instrumentation, the whole vibe of the song was just blessed. I also love the drums on “Bone From Marrow”.
6. When you compose a song where do you get your ideas? How does the song evolve?
This is going to sound really corny and just off my rocker but I really just sit down with my guitar and get into a reflective prayerful mode and I always ask that the Holy Spirit speak through me as I play to glorify the Lord. I’m not uber trained in music theory so really the musical ideas and concepts are very much divinely inspired. For about 50-60% of the chords and progressions I play and the way I structure them I could not sit and tell what they are. I have had dudes from Berkley ask me in the past “how did you come up with that idea?” or “what made you go to this progression from there?” LOL. I always respond thats what the Lord wanted me to play… This is a major reason why music is still so exciting to me and full of mystery and wonder. I feel so close and in such a tight spiritual bond with the Lord when I am composing that sometimes it makes me weep with praise for Him. Especially when I listen to a completed song for the first time.
7. What role does faith play in Visual Cliff?
Faith is everything in VC. Each member has to confess Jesus as Lord and Savior. We do it all for His glory and not our own. We are His musical servants.
8. What can fans expect from you in 2011? Is Visual Cliff a studo band or can we expect to see them live?
2011 will see VC releasing three singles that will essentially expand on the Collective Spirit album. Folks that purchase the new album will get these songs for free as they are completed. We call it the album that keeps on growing. We will most likely remain a studio band unless the right opportunity comes along for a live gig.
9. I see you are a busy man with a lot of different projects. Coul you tell us about some of them?
What keeps me busy is running a recording studio in addition to my day job. I am currently recording the drum tracks that will be on the new Promise Land album (David Michael’s band that he writes and plays guitar in) and I just finished up mixing and mastering a tune for Mike Florio. I am also working with singer Scott Schmitt on releasing a new single for his up coming solo album. I have a couple of other recording studio clients that I am working with as well. Then there are the VC singles that will get underway in a couple of weeks. The music is written for all three of them and mid February the drum tracking for them begins.
10. Thanks for taking time out for doing the interview. Any final thoughts. My God keep blessing you.
Thank you Dale for your continued support. All of us together (those who make the music, those who support and share the music) are making a difference for the kingdom. I am so honored to be in that number and in that fox hole with you! God Bless
You can check out Visual Cliff online via their website.
Interview by: Dale Huffman (Metal Pulse Radio) for Untombed.com