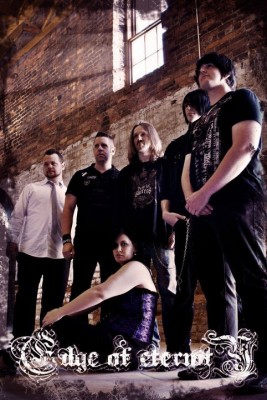 Edge of Eternity is a symphonic metal band from South Carolina.  I recently caught up with Steve Morse bassist for the band.

Could you give us a bit of history on the band and how the band name came to be?

The band started in 2006 with my daughter Jordan Morse on lead vocals. She wrote the song Edge of Eternity, and she and I wrote “Spiritual Anorexia” together. Both songs are on our self-titled cd. My son Josh joined the band in 2007 on keyboards and is still with us. Jordan left the band in 2008 when she was working, going to college and trying to do shows with us. She barely had time to practice. We then got K*Sea, who recorded the cd with us. We have had several lineup changes, but it always seems to push us forward. Our current members are: Ashley Wooten: Vocals, Tyler Bledsoe: Vocals/Guitar, Chris Buice: Guitar, Josh Morse: Keyboards, Steven Wooten: Drums, Steve Morse: Bass.

I (Steve Morse) came up with the name. Every day is one step closer to eternity. I believe that we are on the very edge of time, and when time ends, eternity will begin.

What bands are the major influences for Edge of Eternity?  Does the band try to sound like any other band in particular or make your own sound?

When Jordan and I started the band, I started buying cd’s of bands that had female vocalists. I ran across some amazing bands that really inspired us. Nightwish, After Forever, Epica, and Within Temptation are some of our favorite bands. We all have been influenced by a lot of different bands, and when we write a song, our individual styles come through–I think that is what makes us unique.  So, our sound is different from other symphonic metal bands because of the members varied influences.

You recently released a self-titled album.  Was it difficult making the album?

Not really, just time consuming. We had fun though.

How were the songs created?  Was it a collaborative effort with everyone in the band or are there specific members who write the music and lyrics?

Some songs we collaborated on, and on others Josh Morse, our youngest member, wrote the majority of the music. Stephen Wooten and I wrote lyrics for most of the songs on the album. On our new stuff we are collaborating more as a band.

I see that Edge of Eternity will be playing at Godzfest in August.  Will the band be playing any other music fest during the summer?

As of right now, no. (Ed. note – Edge of Eternity will be performing at GerbStock III in Mill Spring, NC on June 17th)

What is the music scene like there in the Greenwood area?

Does the band have any particular prayer requests?

Pray that we will bring glory to God in all that we do.

Any last words from the band?

If you like our self-titled cd, then wait until hear our next one!!
Pick up their debut CD here.

2 Responses to “ Edge of Eternity – Interview ”