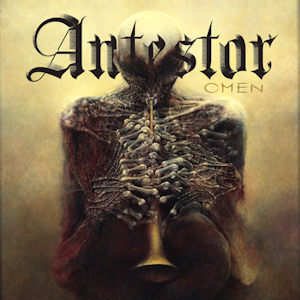 When a band reemerges after an extended hiatus, the jubilation of the fans is often tempered with the question “do they still have ‘it’?” In the seven years since the release of The Forsaken, which was hailed as a masterpiece by several critics, several members of the band departed, leaving only vocalist Ronny Hansen (Vrede) and guitarist Lars Stokstad (Vemod) to continue Antestor’s legacy. Fans also wondered about the ability of the band to find a drummer that could match the skill and intensity of Hellhammer. Given these factors, the question seems legitimate. Fortunately, in the case of Omen, the answer is a resounding “YES!”

From the moment the atmospheric introduction of Omen’s opening track, “Treacherous Domain” yields to doom-inspired riffing, it is clear that the band has chosen to write this new chapter in its history based on themes from the previous ones. The “sorrow metal” of the early albums is most evident in that first track, while the more progressive, technical black metal of The Forsaken is evident in the tempo changes and rhythmic complexities of “In Solitude,” “The Kindling,” and “Benighted.” The instrumental “Tilflukt” (Norwegian for “refuge”) stands out for its acoustic folk sound. The haunting interplay between the acoustic guitar and the fiddle transport the listener to another time and another place, when stone fortresses stood atop the hills as a place for people to seek refuge from the onslaught of invading hordes. The second track, “Unchained,” is noteworthy for the introduction of clean vocals. Extreme metal purists are going to dislike this passage, but I think it works musically and with the lyrics being sung. The final track of the album, “Mørket’s Grøde,” is the only track in Norwegian and contains perhaps the most passionate vocals of the entire album. The bookending of the song with acoustic guitar is a nice touch as well.

Overall, the album is well-crafted and well-produced. Each instrument and voice is given its own space in the mix to give the album a clear and uncluttered sound. The only exception to this is the bass, which seems buried in the mix. The bass is more of a feeling rather than an audible presence. On the first few listens, I was not sure there was a bass playing because what I heard could be the result of the lower pitches of the guitar chords meshing with the bass drums. This may just be a personal preference, but a more articulated bass presence would be a great improvement on this near-perfect album. The triple-guitars work seamlessly to create a thick, complex texture, and the drums maintain the intensity of previous albums through rapid-fire double-bass kicks and blast-beats while creating subtle rhythmic interest through unexpected cymbal and snare hits.

Antestor fans, fear not: this band is as strong as ever. Omen is highly recommended not only to (un)black metal fans, but also to anyone with a tolerance for extreme vocals who is a fan of well-crafted, creative metal.

Today in the town of David a Savior has been born to you; he is the Messiah, the Lord.
Luke 2:11