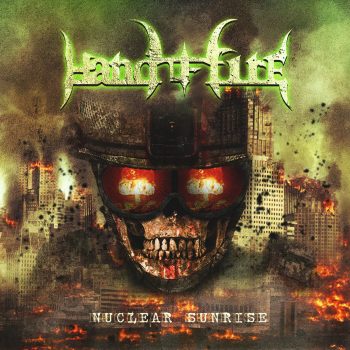 Hand of Fire’s debut album, Nuclear Sunrise, is the album fans of old school Bay Area thrash are looking for. Crunching guitars, aggressive vocals, thunderous and driving drums, and a solid bassline are the bedrock of this album. Honestly, its enough to make us old guys wish we still had the hair to get our epic windmills going.

Asking me to pick my favorite song on this album is like asking me to pick my favorite Reese’s cup—I can’t do it, they’re all great! Each song has its own groove, its own riff collection, and it’s own character, so it is impossible to get bored with this album. The one consistent feature is the top-notch musicianship. The drumming is tight, creating a steady underpinning for the songs without becoming stagnant and boring. Bill Davies does a good job of adding enough variety to his patterns to keep listeners on their toes. Tiago Souza’s guitar riffs draw from classic thrash riffing, but again do not fall into being overly clichéd. The solos range from typical thrash shredding to melodic, again displaying enough variety to keep things interesting. Tom Eaton’s basslines are right where they need to be, more felt than actually heard. Jim Settle’s vocals are powerful and in your face. Some people might not be into the harsh sound—more Vengeance Rising or Ultimatum than Deliverance or Tourniquet—but I don’t have a problem with them.

So, is there anything I don’t like about this album? Well, yes, but it is a really petty and picky thing—the way the vocalist pronounces “nuclear” in the title track. But yeah, that’s it. Eight solid songs. All metal, no fluff, no filler, no ballads. Make sure your neck muscles are in shape, go grab this album, and crank it up!

So you also must be ready, because the Son of Man will come at an hour when you do not expect him.
Matthew 24:44

Therefore, with minds that are alert and fully sober, set your hope on the grace to be brought to you when Jesus Christ is revealed at his coming.
1 Peter 1:13