Taking the Head of Goliath : ST 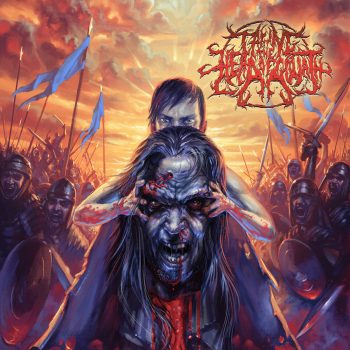 One of the most anticipated albums of 2018 for death metal fans has been the debut from Taking the Head of Goliath. I think it is safe to say your patience has been amply rewarded by this album. This is one of the most brutal and technical albums I have heard in quite some time.

Let me begin by saying if you like to be able to understand the lyrics for the music you listen to, keep moving—this is NOT the album for you. Jake Martin’s vocals are completely unintelligible and entirely brutal. The musical accompaniment is equally brutal while also being technically interesting. The timing in the guitar riffs lapses into the unconventional at times and the drummer throws in a few quirky figures periodically to keep it from being too predictable.

After an ominous introduction(“Of Sin and Death), the album rips into “Oblivious into Oblivion” which begins the intense journey through the album. “The Expulsion of Putrid Illusion” has a really nice riff that feels like it is pulling against the beat. “Trenches” opens with war sound effects and features a lot of stop and start in the riffing. “This Present Darkness” sounds like it could be a trash track with different vocals. “Audacity to Inspire” showcases different vocal styles over some half-time riffing. The final track, “Unearthed/Iniquity’s End” is actual a partial cover of the Crimson Thorn classic “Unearthed” (Luke Renno of Crimson Thorn is the bassist for this band). It is hard to pick a favorite track on the album because they are all uniquely great tracks.

This is an album that will find a place in the top half of my albums of the year lists. It really checks off all the boxes I’m looking for in a death metal album. The whole dedicated track as in an introduction feels unnecessary, but it isn’t a big deal. The bottom line: if you are into technical death metal, BUY THIS ALBUM!

Therefore confess your sins to each other and pray for each other so that you may be healed. The prayer of a righteous person is powerful and effective.
James 5:16