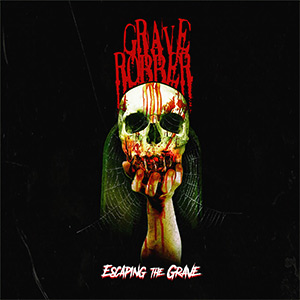 Grave Robber is Escaping the Grave after seven years. Well, there was the Straight to Hell EP back in 2014, but this is their first full-length album since 2011’s incredible You’re All Gonna Die. There’s been a lot of turnover in the band in those seven years, but you couldn’t tell from listening to this album.

It has been a long time since I’ve been so totally blown away by an album on the first listen. After the enigmatic instrumental intro “Burial Ground,” Wretched, Carcass, Viral, Grimm, and Plague deliver an unrelenting barrage of punk riffage, slamming drums, and powerful vocals with plenty of gang choruses to get you singing along. These guys really have this unique ability to go from sounding like they are about to lose control of their instruments one minute to crafting catchy melodies the next. Wretched is no stereotypical punk vocalist. Yeah, he can scream and shout with the best of them (“Into the Pit,” “The Conjuring”), but he can also belt out an lyrical vocal line with the smoothness and finesse of Elvis (“Lips of Blood,” “The Night Evelyn Came Out From the Grave”).

It would be easy to dismiss Grave Robber as just a gimmicky band, but this is really a talented group of writers and musicians. There is not a song on the album that is a skip. In fact, the only real complaint I have about the album is half the songs are less than two-and-a-half minutes long, so the whole album is over too quickly. But the music is solid, and as always with Grave Robber, those horror punk lyrics are cleverly crafted to convey a Christ-centered message.

Welcome back Grave Robber—I hope you stick around for a while!

Surely the righteous will never be shaken; they will be remembered forever.
Psalm 112:6

The Lord will be king over the whole earth. On that day there will be one Lord, and his name the only name.
Zechariah 14:9