Corpse: Among the Dead 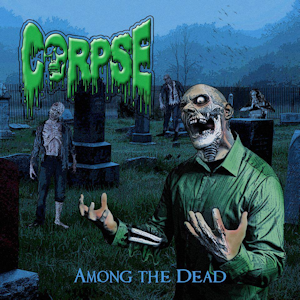 Corpse has risen again with its long-awaited sophomore album, Among the Dead. When I say “long-awaited,” I mean it: the band’s debut album, From the Grave, was released in 1997. The sixteen-year gap between recordings, however, should not trouble fans at all. There are, as might be expected, some notable personnel changes. The band’s original guitarist, Joe Cox, has returned, replacing Jay Mattingly, and Kirk Jones has replaced Sean Emberton on bass. Drummer, Jeff Hoskins, the only member of the band to appear on both albums, also handles the vocals in place of James “Eric” Massie, who passed away in 2009.. I know fans get nervous with so many personnel changes, but again I say: fear not.

Among the Dead is a five-song EP of all-new material. The band originally planned to remake two classic songs (“One Living God” and “Locked in a Casket”), but later decided the older songs did not really fit well with the new material. I admit I don’t really “get” the “Intro” that begins the album. It seems like something they were playing around with in the studio and the recorder was on so they decided to use it. I guess when I think of something titled “Intro” I expect it to be leading in to the next song or somehow set the stage for what I will be hearing. I guess it does set the stage to some degree, but it does not feel like it is really going anywhere. The other four songs are absolutely solid, with enough variety to be interesting and enough similarity to create a unified album. “King of Tyre” and “Open Mind, Straight to Hell” feature hooky riffs and more technical drumming with some contrasting break sections, whereas “Among the Dead” is more straight ahead, full-bore death metal with blastbeat drumming and blistering guitar leads. “Chilling Fear” really blends the two approaches. Lyrically, the songs are overtly Christian and quite thought-provoking. For example, “Among the Dead” paints a picture of the new believer discovering the situation from which he came:

Crack open your eyes for the first time
You realize you’re among the dead
A sea of endless corpses, empty cold remains
You try to talk to them but see it’s not the same
As before you were risen from the grave.

In my opinion, the downside of this album is that it is only four substantive songs, but really it comes down to- ‘better to have some new Corpse than none at all’. In some places the vocals are a little more forward in the mix than I prefer, but I don’t think the balance is thrown off by that at all.
At the time of this writing, Among the Dead is available only as a digital download. In September it will be released in CD form with a bonus disc, The Early Years, that includes selections from the band’s three recordings that predate From the Grave (the 1993 demo, You Must Die, and Corpse for President). At this time the bonus disc material will only be released in physical form and not digitally.