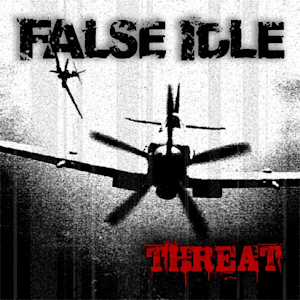 If you have been in the punk scene long enough then you’ve probably heard of Thumper Punk Records. If so, without any doubt, you’ve probably heard one of their finest bands called False Idle. Both Sef Idle and Tyler Lewis used to be in the band UniSef. After they called it quits they formed False Idle and completed their line-up with Seth Warren and Philip Harris
False Idle debuted with their EP ‘Hymns Of Punk Rock Praise’ in 2010 and released their next EP ‘I Refuse in 2011’. Both are solid releases and craved for more.

The sound of planes coming by….And we’re off, guitars, drums. Threat kicks off with a hardcore vibe. There seems to be a kind of flow in the songs that are very natural. After a few songs the album becomes a bit more melodic, which shows the versatility of the band.

The first song that really stands out for me is “One Cause, One Fight”, a song about unity; standing strong together in this world as brothers.
Another great song is “Land Of Me”. This is not only musically one of my favorites, but also lyrically. The lyrics are confronting and relevant as it deal with the topic of selfishness….How do we deal with our selfish hearts:

The title track ‘Threat’ is a folky punk rock song. It’s actually more of an anthem for what they stand for and it might even sum up the essence of the whole album. They call you a threat to society when you speak up your mind and tell what you don’t agree with. But it’s so important to take a stand and tell what’s on your heart.

We continue with one of the loudest but also best tracks of the album, ‘A Tension’. It’s straight forward, in-your-face, raw and energetic punk rock. It’s exactly how I like it. The same feel is to be found in the song ‘Retaliate’.
‘New Brand Of Revolution’ and ‘Where Do We Go’ have a more melodic sound. The songs almost flirt with the pop-punk sounds of bands like Huntingtons and Slick Shoes. The album closes with the excellent track ‘In The Dark’. A positive note that we don’t have fight this fight alone. We may abide in Christ alone!

Threat is everything you want it to be in a punk album. The music is raw, energetic, but on the other hand also catchy and melodic. Their lyrics are thought provoking. They deal with societal issues, politics, media, selfishness but maybe most important, life itself and how we live it. Punk at its best!

This is love: not that we loved God, but that he loved us and sent his Son as an atoning sacrifice for our sins.
1 John 4:10

Salvation is found in no one else, for there is no other name under heaven given to mankind by which we must be saved.
Acts 4:12