My Silent Wake – Silver Under Midnight 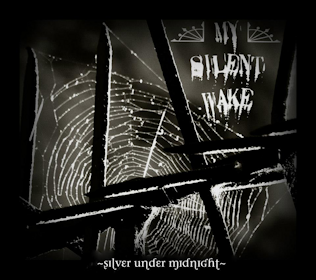 One thing that really stands out with this album is the more frequent use of clean vocals.  In that sense, it sounds a bit like Century Sleeper while still maintaining the melancholic nature of My Silent Wake.  As always with a My Silent Wake release, it’s the subtle things that really make the album memorable.  Like the drumming in the song “The Last Man” where the beat has a familiar sound before it gets changed up to reveal something new.  Both songs “Oblivion” and “My Killer” have another great MSW trademark – the use of some minor chords tossed into a heavy rhythm to bring in that feeling of doom and melancholy to what’s been laid down.  “Third Season” is the last and longest track of the six vocal tracks (“Midnight” is the opening instrumental).  The song clocks in at over 14 minutes.  The way that the band slowly builds the song with familiar sounds that still sound completely new is always amazing.  Ian’s vocals are so haunting – it really adds the perfect touch to to the album.

The album is currently out via Bombworks Records as well through the band.  This is the second album released this year from the band.  Bombworks Records recently re-released The Anatomy of Melancholy: The Reanimated Version and they’ll release later in the summer their acoustic album Preservation Restoration Reconstruction.  The band will also be offering the acoustic album on vinyl.  You can find more information about that release through their official webpage (listed below).

My Silent Wake just keeps releasing great death/doom that never gets old and always brings something new to the ears.

The Lord your God is with you, the Mighty Warrior who saves. He will take great delight in you; in his love he will no longer rebuke you, but will rejoice over you with singing.
Zephaniah 3:17