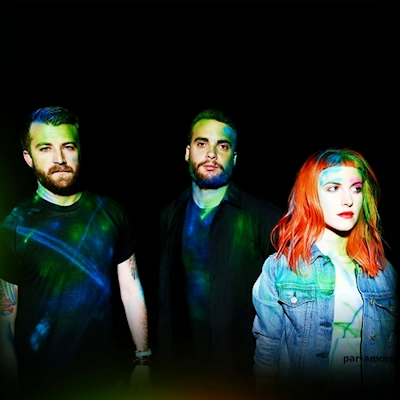 I can hardly believe it, but, Paramore is close to a tenth anniversary already! The band was formed in 2004 and released their debut in 2005. We can thus conclude that Paramore was no flash in the pan. Indeed their popularity has only grown; not only America but also internationally. The whole world seems to have embraced this band.

Their big success came in 2007 with the release of ‘Riot!’. By that time, the band had already finished two Warped Tours and was working on a third tour. ‘Riot!’ was followed by the release of ‘Brand New Eyes’ in 2009, which became an even bigger success for Paramore.

Needless to say, after all their successes in recent years, the expectations for this new album were high.

Their newest album is self-titled ‘Paramore – Paramore” and from the first kick-off it is clear that this is a different Paramore. Synthesizers have never been as present on their albums as it is on this release. On some tracks it works, but on others it doesn’t work at all. Unfortunately, one of those times when it doesn’t work is on the very first track ‘Fast In My Car’. It just misses the bite that you want a first track to have. I would have picked the 2nd track as opening track. It shows the band’s new direction, which is a more poppy commercial sound, without losing the edge, which was the sound heard on the albums Riot! and Brand New Eyes.

That poppy sound is clear in tracks like ‘Grow Up’, which could have been a Pink song. Also, ‘Ain’t It Fun’ is on the poppy side. It flirts a bit with the synthesizers used in the 80’s by Alphaville.
The band also has a few acoustic tracks on it. They are marked as interludes. Interlude – Moving On and Interlude: Holiday are just Jason Mraz rip-offs. However, ‘Interlude – I’m not angry anymore’ is one of the better tracks of the album. It rocks, but unfortunately it’s just too short.

Wait, there is more. There is also some good rocking highlights on this album. Anklebiters is a bright punk rock song which could have been on the Riot! album. Proof and Still Into You are in that same range. They might be the best radio hits on the album. Also Be Alone is strong; one of their strongest efforts.
Part II is also an excellent track. It’s a well crafted song with some distinctive christian lyrics. But the best song of the album is the last track Future.. It clocks 7.51 and it’s worth buying the complete album. The song builds up so beautiful. It’s some excellent shoe-gaze. I would love to hear a whole album with songs like this from Paramore

I think we can conclude that from a Rock perspective this is a mediocre album. It has a few good songs on it that make buying the album worthwhile, but, there is just too many poppy songs on it.

Rating: 3 out of 5
Reviewed by: Sieto Kooijker

Paramore: Still Into You [OFFICIAL VIDEO]

The father of a righteous child has great joy; a man who fathers a wise son rejoices in him.
Proverbs 23:24

One thing I ask from the Lord, this only do I seek: that I may dwell in the house of the Lord all the days of my life, to gaze on the beauty of the Lord and to seek him in his temple.
Psalm 27:4