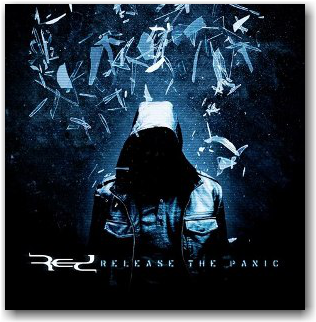 The band Red doesn’t need much introduction. After having two Grammy nomination, winning 5 Dove Awards and selling around a million units with their previous Albums End Of Silence (2006), Innocence & Instinct (2009) and Until We Have Faces (2011) we can easily say Red is one of the biggest rock bands around at this moment.

Expectations for the new album therefore were high. For this record Producer Howard Benson was hired. He is also responsible for the sound of bands like POD, Skillet and Blindside. First thing he said was he wanted to hear someting new.

“Release The Panic” starts strong and aggressive with the title track. There is clearly a different approach. The backing vocals that were always evident on previous records is much more subtle and more in the background. In addition, there is a lot more programming to be heard. That gives the sound more depth than ever.
The next song “Perfect Life” is a nice catchy rock song in the lines of Skillet. The song is about the empty life that many of us seek.

“Die For You” almost has that industrial sound. A sound that is also clear in “Damage” and “Same Disease”. It gives a dark sound to the record. Which totally fits the lyrics.
The song “Damage” is about the mess that we can make in life.

“Hold me now” is one of the highlights of the record. Musically the track sounds a bit like the bands 30 Seconds To Mars and Switchfoot. De lyrics are a cry out to God when you don’t see the end of the road anymore. One suburb song!

“if we only” starts off agressively, but in fact is a beautiful crafted rock song. The String orchestra gives a beautiful touch to the song. The song deals with anger and is in fact a search for forgiveness.
“so far away” is sort of a modern psalm. It talks about Gods love that is even present if we feel so far away.

“Glass House” Is about the brokenness of this world. We run and fight, but the fact is, we need Jesus. It looks like the album cover also revers tot his song.
The album concludes with “The Moment We Come Alive”, a Piano based rock song. It is a well crafted song and it is the conclusion of the album.

Release The Panic has become a dark album, both musically and lyrically. Musically the album is probably the best they have ever recorded. It has become a diverse album with a lot of depth in both music and lyrics.
The album deals with brokenness, shame, anger and the fight to live life on our own, but it also talks about the hope we can find in God.

There are two different versions of the album. The standard and deluxe edition., which includes 2 bonus-tracks and 3 remixes of older songs.
Personally i think both bonus-tracks should have been on the standard album. Both songs deal with the same themes as the album and fit in. Also the standard edition is only 30 minutes, which according to me is a bit short for an album.

Blessed is the one who perseveres under trial because, having stood the test, that person will receive the crown of life that the Lord has promised to those who love him.
James 1:12

Therefore, if anyone is in Christ, the new creation has come: The old has gone, the new is here!
2 Corinthians 5:17