Righteous Vendetta: The Fire Inside 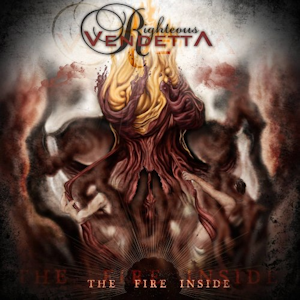 While Righteous Vendetta is no stranger in the Christian hard music scene, I must confess that I actually haven’t given the Wyoming-based band much attention. Mainly because I thought it was just another metal-core band. Man! Was I wrong. Although metal-core influences are definitely there, I would say the band plays more of a metallic brand of modern hard rock comparable to bands like Red.

The opening track, ‘Defiance’, immediately sets the bar. Righteous Vendetta opens brightly with greasy guitar riffs, aggressive vocals and a nice catchy chorus that is a bit reminiscent of Pillar in its heyday.
‘This Pain’ is the first single of the album that deals with the serious topic of suicide. The single coincided with the month of September – “Suicide Prevention and Awareness Month.”

In the song ‘What You’ve Done’ we hear some very good craftsmanship. Besides the usual riffs, the guitar player shreds like a monster. We also hear some nice tempo changes and variation in the drums.
The title track ‘The Fire’ Inside is perhaps one of the best tracks on the album. It contains everything this band has to offer, the riffs, aggressive vocals in the verses and a wonderfully melodic chorus. Actually, the melodic choruses lingers the most in the songs. For example in ‘So Long’, what might even be one of the heaviest songs on the album and the chorus stands out the most which reminds me a bit of Skillet.
In the second half of the album, Righteous Vendetta seems to have found some edge. In ‘Fight Back’ we can hear some tasty riffs, pounding drums and even some gang vocals. With ‘Far Away’ and ‘Back To Life’, Righteous Vendetta have increased the tempo. The songs are much faster than the rest of the album. In ‘Losing Control’ and ‘For The Skeptic’ we finally hear that the band indeed plays some actual metalcore, much more agression, much more energy and pretty heavy.

Righteous Vendetta shows they can maintain in the hard music scene with two singles in the top 20 and even a top 10 position for ‘The Fire Inside’ on the Billboard Christian Rock chart. Does Righteous Vendetta create innovative music? No not really. Perhaps it is even a bit dull. One cannot argue about taste. I am glad the quality is high standard.

Do not say, “Why were the old days better than these?” For it is not wise to ask such questions.
Ecclesiastes 7:10

For, Whoever would love life and see good days must keep their tongue from evil and their lips from deceitful speech. They must turn from evil and do good; they must seek peace and pursue it.
1 Peter 3:10-11