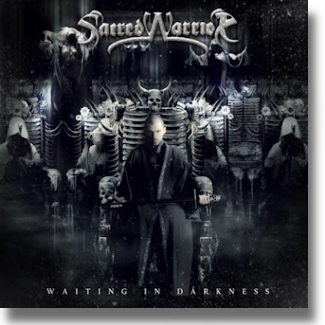 One thing that you’ll first noticed about Waiting in Darkness is that while there are some underlying sounds from previous albums, the music is updated and fresh – bombastic at times. Another thing to notice is that Eli is using his lower register in some of the songs, like in the opening track “Desperately Wicked”.  This adds a depth to the music that isn’t expected.  In addition, some of Bruce’s guitar work is amazing, like the opening for the self-titled track “Waiting in Darkness” (video posted below).  Tony also pulls off some great smashing and bashing on the drums, which gives the album the bombastic feel.

There are two slower songs “Fallen Hero” and “Jealous Love”, which have emotional depth and haunting melodies that are very similar to the classic SW tune “He Died” from their Rebellion album.  The song “Long Live The King” really shows how tight the band has become and how well they all work together.  The way the drums, bass, keys, guitar and vocals all work is simply magnificent.

Look at the birds of the air; they do not sow or reap or store away in barns, and yet your heavenly Father feeds them. Are you not much more valuable than they?
Matthew 6:26

In God, whose word I praise— in God I trust and am not afraid. What can mere mortals do to me?
Psalm 56:4