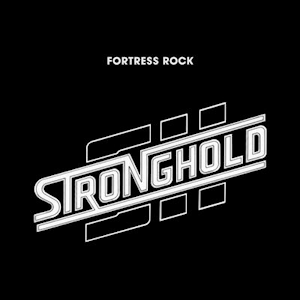 If you are like me, you had never heard of Stronghold or their 1982 release Fortress Rock until this remastered reissue from Born Twice Records (a division of Retroactive Records).  Fortress Rock is eight tracks worth of dark, bottom-heavy, riff-laden hard rock/metal that is without a doubt the heaviest music the Christian music industry had to offer at the time.  I do not want to oversell any kind of Black Sabbath comparison, because it would truly be misleading, but the low-end riffs, powerful drums, and plodding bass definitely give grounds for it.  Perhaps a better comparison would be some of the darker, heavier offerings from Blue Öyster Cult.  In fact, as I listen to “No Superstars for Jesus” as I write this, my mind easily wanders back and forth between this song and BOC’s “Godzilla.”

As for the album itself, the music is incredibly consistent without any songs that I want to skip over.  On the other hand, there are no real stand-out songs either, although there are two songs that stick with me more than the others.  The opening track, “Stronghold,” begins with a synthesizer and vocoder rendition of the Lutheran chorale “A Mighty Fortress Is Our God” that makes it sound like this is going to be another band in the vein of Petra or White Heart as if to ease listeners into the album before launching into a heavy riff for the chorus.  By the end, “Stronghold” turns into a full-blown rocker.  The other song that sticks with me is “Barabbas.” a fictionalized tale of the man who, according to the Gospels, was spared instead of Jesus by the crowds.  Also worth mentioning is “Daybreak’s Coming,” the more melodic ballad on the album.  I can’t help thinking of some of WhiteHeart’s ballads, like “Montana Sky” or “Eighth Wonder”when I hear this one.  The music is dramatic, alternating between quiet sections that seem reflective and more emotionally intense sections with plodding riffs and pounding drums.

Overall, this is a solid album and a must-have for those who are fond of that late-70s/early-80s rock sound.  While the production is a bit muddy and the sound is dated (think Stryken First Strike), the remastering by J Powell at Steinhaus creates a depth to the sonic quality that was lacking in the copy of the original to which I was able to compare it.  One of the characteristics of Powell’s work that I really appreciate is the way he trims the silence at the beginning and ending of the tracks to create more continuity in the album, and that really works here as the songs flow almost seamlessly from one to the next.  I know some people are hesitant to buy remastered versions of albums already in their collections, but I think this one gives the instruments and voices a little more space, and that breathes new life into this should-have-been-a-classic album.