The Almost – Fear Inside Our Bones 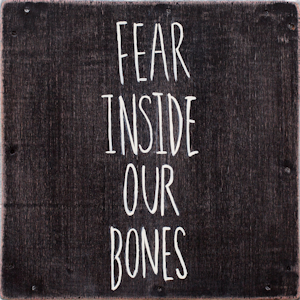 It’s been four years since the release of Monster Monster, not counting the EP with some extra bonus tracks from that same recording sessions. So it was about time to hear some new songs from The Almost. I actually had the chance to hear some of the songs in the summer of 2012, live at Flevo Festival.

Fear Inside Our Bones starts off with the first single of the album called “Ghost”. The first track sets the tone for the rest of the album. The Almost seem to have left the pop/punk influence outside the door and have embraced the southern rock genre.

We continue with the second track which is the title track “Fear Inside Our Bones”. It’s one of my favorite songs on the album. It’s a song that deals with questions about fear, doubt and worry. Fortunately, we are not alone. The next tracks “I’m Down” (video posted below) and “Never Be Like You” have the same southern rock touch as the first one and it will be an influence throughout the whole album.

“Come On” is actually the first track where we hear The Almost that we know from albums ‘Monster Monster’ and ‘Southern Weather’, and I must say, it’s how I actually prefer their music. “Come On” is a fresh radio friendly rock song and is one of the highlights of the album.

Does the album only contain rock songs? No, we actually have a ballad of sorts on the album. “The Florida Sun” is an ode to the state of Florida where lead singer Aaron Gillespie was born and raised.

The peace was short-lived, because the second half of the album seems to be a bit more aggressive. “Fight Song” and “So What” are probably the loudest rock songs on the album. They are raw, high energetic and catchy at the same time. It reminds me a bit of “Thirty Seconds To Mars” and maybe the edgier Switchfoot tracks.
“Lonely Boy” is the closer of the album. Though it is an excellent cover of the Andrew Golds classic it just feels like a filler when you put it at the end of the album.

The Almost – I’m Down (Official Video)

And if you do good to those who are good to you, what credit is that to you? Even sinners do that.
Luke 6:33

Let the peace of Christ rule in your hearts, since as members of one body you were called to peace. And be thankful.
Colossians 3:15