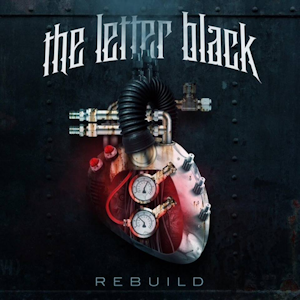 About three years after the successful album, ‘Hanging On By A Thread’, The Letter Black is back with their new album Rebuild. The title is deliberately chosen. The last album told the story of a healing process being at rock bottom. Rebuild is the continuation of that process.

Rebuild kicks off strong with ‘Sick Charade’, with guitar riffs that blow your ears and sounds very promising as an opening track. Unfortunately, coming at the second track it turns the opposite way with ‘Break Out’. The biggest problem is that it doesn’t sound new. Everything you hear, you’ve already heard before. The mid-tempo rock is solid, but the track simply lacks the fresh sound we heard on ‘Hanging On By A Thread’.

Next is also the first single from the album, ‘Pain Killer’ (video posted below). This is a song with a clear focus on the power of love. A fine choice, but it is not the highlight on the album. For me the song that stands out the most is ‘Found’. This song is a Paramore-like rock ballad with a message of hope, and has the potential to become a huge hit single.

The Letter Black rocks on with the up-tempo rock song ‘Up From The Ashes’. What immediately strikes the listener on this song is the catchy chorus. Another highlight on the album is the excellent rock ballad ‘Outside Looking In’. It’s a solid arrangement , especially the addition of the piano, which works very well in the song.

Unfortunately, after a few listens, I have to conclude that the first half of the album is significantly better than the second.

The album wraps up with the title track ‘Rebuild’ and ‘Smothering Walls’, which flirts a little with the Southern Rock genre without leaving a big impression.  ‘Shattered’ feels more or less like a dime-a-dozen rock ballad. Fortunately, the album ends on a somewhat positive-note with the up-tempo rocker, ‘Branded’.

According to The Letter Black, Rebuild is a huge step forward. I would rather say a big step backwards. Rebuild doesn’t even come close to the quality found on their previous release; ‘Hanging By A Thread’, which was solid, fresh, diverse and sounded catchy. Rebuild has a few memorable songs on it, but, as a whole, it is far from solid and therefore rather disappointing. Hopefully their next effort proves me wrong and will blow my mind.

Rating: 2.5 out of 5
Reviewed by: Sieto Kooijker

Dishonest money dwindles away, but whoever gathers money little by little makes it grow.
Proverbs 13:11

Seek good, not evil, that you may live. Then the Lord God Almighty will be with you, just as you say he is.
Amos 5:14