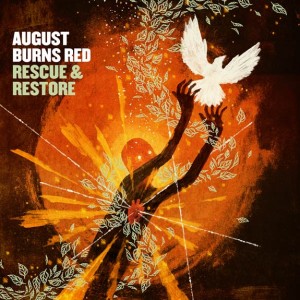 Rescue & Restore, the highly anticipated fifth studio album from AUGUST BURNS RED, has debuted at an impressive #9 on the Billboard 200.

The debut marks the band’s first entry into the Top 10 and the highest chart position of the band’s career, besting that of AUGUST BURNS RED’s celebrated 2011 release, Leveler, which debuted at #11.

Rescue & Restore’s commercial success is matched by its critical praise, with glowing reviews issued by numerous outlets including Alternative Press, who called the album “An immediately impressive work of skill and creativity well-removed from the rehashed riffs and tired scream-sing antics that plague the genre,” further stating that “Rescue is a bold step forward for both the band and anyone attempting to follow it.”

In addition to its #9 debut on the Top 200, Rescue & Restore also bows as the #2 Hard Rock Album, #3 Rock Album and #1 Indie Album. For AUGUST BURNS RED, the debut marks another highlight in an already storied history that includes nearly a half-million albums sold. Rescue & Restore represents another significant achievement for one of the most influential acts in the current field of heavy music.

Select praise for Rescue & Restore:
“An immediately impressive work of skill and creativity well-removed from the rehashed riffs and tired scream-sing antics that plague the genre, Rescue is a bold step forward for both the band and anyone attempting to follow it. (4/5)” -Alternative Press

“a band light years ahead of their competition” -New Noise Magazine

“A striking display of artistic proficiency, a metalcore masterpiece, and the brainchild of five tremendous musicians… prepare to have your faith in metalcore restored” -Property of Zack

“Rescue & Restore is demanding and rewarding… August Burns Red keep their place atop the heap (4/5)” -About.com

“[Rescue & Restore is] not only the band’s most potent release, but it’s also their most musically and lyrically inspired, and in the overplayed genre of metalcore, this comes as quite a relief.” -Substream

“[Rescue & Restore] overflows with musical ingenuity… August Burns Red is doing things that nobody else is doing, and so I tip my hat to them for their daringness and audacity (8.5/10)” -Mind Equals Blown

“This isn’t just metal anymore; this is art” -Kill The Music

“If all metalcore bands could play as well as August Burns Red, the genre wouldn’t be such a dirty word amongst metalheads” -Exclaim!

And every tongue acknowledge that Jesus Christ is Lord, to the glory of God the Father.
Philippians 2:11