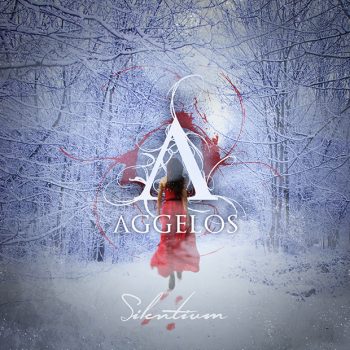 Silentium is the sophomore release from Columbian gothic/symphonic/doom metal band Aggelos. The eight-song album is an artistic retelling of the Passion, meaning it isn’t so much a setting of the Biblical story as it is a set of songs inspired by the events of the story. “Yerushalaim” opens the album by emerging the listener into the “Triumphant Entry” into Jerusalem; “Higuera Seca” (The Withered Fig Tree) deals with the subject of people who resist God to their own destruction; “Panis Vitae” (Bread of Life) presents the ideas of life through death. Other songs continue those themes.
Musically, Aggelos blends aggression with beauty—the metal guitars with the symphonic keyboard pads, the “beauty and the beast” vocal pairing of Juan Londono and Carolina Giraldo Sánchez, the relaxed, flowing sections with the driving drums. This isn’t the power metal of Nightwish, it is a heavy, doomy aggression more along the lines of Nordic Wolf. The lyrics are mostly in Spanish, with some Hebrew and Latin thrown in as well (I also think I heard some German in “Sententia.”) The album took a couple of listens to get into for me, but that says more about my expectations than the quality of the recording. Carolina’s clear voice and operatic style is a perfect fit for the gothic atmosphere of the music, and Juan’s rasps are a perfect contrast.
If you have heard their debut, Mantos Purpûreos, this album is heavier and more mature, and definite leap forward for the band. Some people might find the high-pitched celeste that seems to be a musical unifier for the album to be a bit annoying, particularly if you are listening through earbuds as it can be quite piercing.

Dear friends, since God so loved us, we also ought to love one another.
1 John 4:11