Ancient Prophecy : Pounded By Our Sins 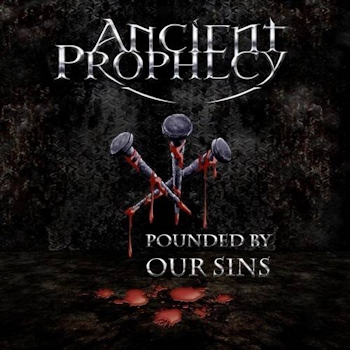 When most people think of Christian metal bands from Europe, they normally think of Sweden, Norway or Finland, but the metal in Germany has been pretty strong as well with bands like Seventh Avenue and Sinbreed . . . . and now you can add Ancient Prophecy to that list.  The five piece band has released their first full length album – Pounded By Our Sins.  The lyrics are well written and fresh.  While guitarist and harsh vocalist Tobias Buß writes a majority of the lyrics, other members – like drummer Lynn Neißner and guitarist Florian Kraus also provide lyrics for some of the songs.  And while you can tell that the lyrics are very much Christian, they aren’t preachy, turn-or-burn style lyrics.  For example, the lyrics from “I’m Still Dying” show how even us Christians struggle:

“Whats the cause? I am still depressed.
So confused, I cannot rest.
Unspoken thoughts, they cut me down.
Can’t free my mind from being down.

And the maturing that we experience when we learn to rely on God:
“It’s so hard to realize I fail standing
On my own feet, to recognize
That with my own strength
I can’t manage.”

The music is best described as pure metal.  While the band does have some keys in their songs, they’re not used extensively like you’d hear from power metal.  This is more straight-up, in-your-face metal.  And one of the things that makes this band’s sound so unique is vocalist Jaqueline Kunz.  She has great vocal range.  She has no problem keeping her sound strong whether in the low to mid range as well as her upper range.  Plus, at times, she also sings with a slight growl to her vocals.  This really adds to the variety of the music.  Songs like the opening song “Metal Is Still Alive” and “True Trinity” have slow sections followed by faster sections all the while having plenty of great solos and hooks.  The track “Pounded” has probably the fastest tempo section within the song on the album and is a favorite of mine.  They almost cross into thrash metal territory with it, similar to what Bloodgood did with their song “Black Snake”.  And one interesting thing that I heard was from the song “Brightness In The Dark“.  The opening section reminds me a bit of the prelude to the song “Recycle Your Life” by another German band – Bad News For The Devil, but I seriously doubt that any of the band members have even heard of this obscure band (but maybe I’m proven wrong).

Overall, this is a truly enjoyable release.  It’s variety keeps the songs moving forward.  The lyrics are solid, the delivery is excellent and the music grabs you.  Hopefully there will be even more great releases from Ancient Prophecy.

Surely the righteous will never be shaken; they will be remembered forever.
Psalm 112:6

You are the salt of the earth. But if the salt loses its saltiness, how can it be made salty again? It is no longer good for anything, except to be thrown out and trampled underfoot.
Matthew 5:13