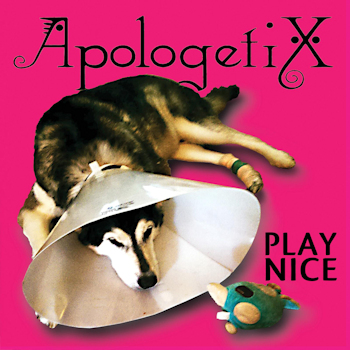 ApologetiX‘s latest release, “Play Nice“, brings us 12 more exceptionally performed parodies.
By taking popular songs, changing the lyrics and teaching Biblical doctrines and stories, J Jackson and his crew have come a long way from their rudimentary days 23 years ago. On this, their 29th effort, they have proven they are in this for the long haul. The band has hit every note and J has once again proven himself a worthy vocalist, taking on the ranges of Klaus Meine, Billy Squier, Wally Palmar, Eric Martin and others.

Inspired by the album’s title to “Play Nice“, the cover and inserts are humorously adorned with band member’s pet dogs and pups. J explains the album’s title by demonstrating not only Scriptural admonitions to “Play Nice” with others, including our enemies (Matt.5:44), but the fact that the various band members, songs from different genres, and multiple singers bring a need to be more flexible, patient with each other, and to ultimately “Play Nice“.
Not my favorite album title, but nevertheless, I will attempt to “Play Nice” with my review as well.

Of particular pleasure to my ears is the recent inclusion of female vox. Early in the game, J had attempted the occasional song satires that were originally performed by a female (with less than satisfactory results). But with inclusion of Kristen Cataneo, Janna Jackson, Krista Haynie, and Keely Singer, we have some excellent female led parodies that mirror the originals with strong comparisons. Such examples on this album would be Act Selfless, Desperate Queen , We Got The Feet , Sheba and Tufftumbling, to name a few.

As a biased, long-time fan of ApologetiX, I have at times turned a deaf ear to some songs that J Jackson missed the mark on. As satirists, the band and singer are not obligated to “sound like” the original artists, anymore than Weird Al sounds like those he parodies. However, J Jackson has set his own bar high with previous releases as he has challenged himself with each album to sound very similar to the artists he mimics.

Getting the negative over with right away, the only track I find myself skipping is J’s attempt at Neil Diamond on what I deem as the weakest track, “Psalms Come True” a parody of ‘Song Sung Blue’ . Though it’s not unpleasant to listen to, it’s not a go-to track for me. That aside, this album hits all the right notes for me and is both strong musically and vocally. There are some tracks that really standout for me, such as ‘Drop Your Knife and Hurry, Man‘ which parodies The Scorpions: “Rock You Like a Hurricane“. This satire follows the story of Abraham and the faith he demonstrated with his own son – the foreshadow of what God the Father was to provide in His own Son for all mankind. One of my favorite tracks on “Play Nice“. Sometimes I wish ApologetiX would create entire albums dedicated to specific bands. The Scorpions, of whom I’d love to have an entire album of just Scorpion songs re-written by J and the boys.

One of the huge appeals of ApologetiX to me is their affinity for 80’s rock. Transitioning smoothly from The Scorpions to Poison just keeps things rocking for me. Another well executed imitation of Bret Michael and company’s “Unskinny Bop“. Again, the lyrics flow as if they were meant to be the original words to the song. Jackson tackles the topic of the Great Commission and our “Unfinished Job” in bringing lost souls the Good News of Christ’s finished work on our behalf.

“To Be Rebuked” closes out this great addition to the ApologetiX catalog. Based off of Matthew 18:15, the band conquers the acoustic “To Be With You” by Mr Big and helps encourage believers to lovingly and gently open the eyes of a fellow believer to his own sins that are harming themselves and/or others. Not an easy topic to handle as many today prefer to live and let live, without upsetting anyone. I myself have been in need of a good kick in the pants at times, and find that I’m not only encouraged in this track, but that the lyrics, as always, are written so smoothly, they could have been the original words.

Over the years, it seems I’ve only met two types of music lovers – those who dig ApologetiX, and those who don’t care for them at all. Rarely have I met anyone that does not have a strong opinion for or against. As a fan of parody, MAD Magazine, Weird Al, Dr Demento and the like, I am personally biased in recommending this album. However, attempting to listen without a bias, I still find it to be a great album from beginning to end. If you are a big 80’s music fan, do yourself a favor and pick this one up.

Rating: 4 out of 5
Reviewed by: Jim Willis

Walk in obedience to all that the Lord your God has commanded you, so that you may live and prosper and prolong your days in the land that you will possess.
Deuteronomy 5:33

Bear with each other and forgive one another if any of you has a grievance against someone. Forgive as the Lord forgave you.
Colossians 3:13