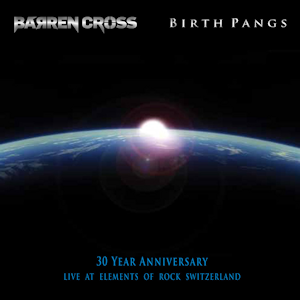 What can I say?  What a GREAT Live Album!  I truthfully have never been fond of Live albums.  For me, I would rather see a band Live then hear them on a CD.  But I must say that this is the best ever Live album I have heard!  Barren Cross is on point during this concert and WOW!  What a treat it must have been for the audience to experience something that many have never seen…..Barren Cross back together and performing LIVE!!!

Barren Cross was one of the founding bands of Christian “Hair” Metal in the 80’s and at the time were signed with the same record label as Stryper, Enigma Records.  When I was a youngster I used to compare the sound of Christian Metal bands, to secular bands.  BC reminded me of Iron Maiden, simply because of Michael (Lee) Drive’s voice, and Jim LaVerde’s bass sound.  Christian Metal was finally being recognized in the secular market and Barren Cross was at the forefront of it all.

This album marks the 30 Year Anniversary for Barren Cross and it takes place at the Elements of Rock in Switzerland, from 2012.  2 CD’s packed with BC hits and a total playing time of one and a half hours!  The double CD comes in a cool package too, with a booklet.  When I heard this CD was coming out I was hoping for some new studio material, but unfortunately not.

There are 3 new songs that have never been heard.  The first, on CD 1, is “Return of the Light”, which Michael Drive says was the first song he ever wrote with Barren Cross, but it never made it on their first EP ‘Believe’.  It fits right in with that era of BC.  On CD 2 is the second new song, “A Walk with God”, which is actually an acoustic solo, with no lyrics, performed by Michael Drive.  The third is “Whitewashed ‘Love’”.  This song is very up-tempo with some punk mixed in.

The members of BC have not missed a beat when it comes to performing.  It has been a while since I had heard a band Live that sounded so tight!  Michael Drive’s voice sounds great, Ray Parris’ guitar doesn’t miss a lick, Steve Whitaker’s drumming doesn’t miss a beat, and Jim LaVerde’s thumping of the bass is ever present!

Ultimately, if you’re a fan of Barren Cross you will love this album.  It made me yearn for more new material from the band.  The band has a special place in my life.  Along with Stryper and White Cross they are one of the bands that turned me from Top 40 (Pop) music, to the Metal scene, when I was 13 years old.  To this day I still love listening to BC and their sound never seems dated.  Here’s hoping that the band comes out with a new album, with new material soon!

Rating: 4 out of 5
Reviewed by: Tom Metcalf

Blessed are the peacemakers, for they will be called children of God.
Matthew 5:9