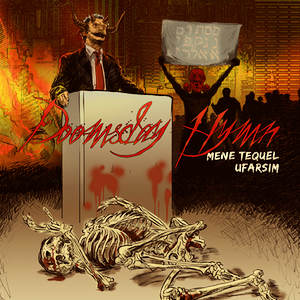 Brazil’s Doomsday Hymn formed in 2012 with the goal of blending traditional and modern metal styles into an intense aural assault to breathe life into a stale sound. Since its 2013 EP, the band has expanded and honed its craft, leading to its full-length debut, Mene Tekel Ufarsim.

The band’s bio describes its music as “a hair-raising, hectic display of comprehensive metallic prowess, bold and brutalizing enough to bring about true Armageddon.” Yeah, that pretty much summarizes things well. Musically, there are no punches pulled, no mercy shown, and no ballads. Well, there is a brief quasi-acoustic section in “Poderoso” and the guitar interlude on “A Resposta,” so maybe there is a 15-second break to catch your breath on the second song of the album and maybe another 25 seconds on the last song.

My first instinct is to call the music “metalcore,” but there are so many overt thrash and groove influences, that I fear I would be pigeonholing them into a category that will turn off a lot of potential fans. The vocals are rough, but not growls. In a lot of places, the vocals are stylistically similar to Master of Puppets/…And Justice For All-era Metallica. There are also some melodic sections, but those are rare contrasts with the overall style. There is quite a bit of variety in terms of rhythmic figures and riffs not only between songs, but within them as well. The fourth track, “Guerrerio,” begins with a riff borrowed form classic metal. The opening riff of “Destuidor” sounds very thrashy. The songs are not static; every one employs some sort of change in the groove or overall tone at some point. There are even a few (brief) guitar solos throughout the album

All in all, Mene Tekel Ufarsim is a must for anyone who likes aggressive in-your-face metal. The music is intense, the musicianship is high-caliber, and the mix on the album is really good so that everything is audible and nothing dominates. One of my favorite elements of the mix is the way the high toms come to the front in places, adding an ethnically Latin sound to the music. . So yeah, there is a lot of “-core” in the music, but there’s also enough other stuff in there that even the anti-metalcore crowd might find something to like about the music. Honestly, the only negative thing I could come up with to say about the album was that the vocals are entirely in Portuguese so I had no idea what they were singing. The band does have English translations of the title track and “Medos” on its website, so I was able to get a general idea of their lyrical content that way.

If you still are not sure about this album, go on over to their Noisetrade page and download “Medos” and try it out for yourself. Otherwise, go get yourself a copy of this album and help Doomsday Hymn achieve its goal to “deliver doom to metal heads around the earth.”

Look at the birds of the air; they do not sow or reap or store away in barns, and yet your heavenly Father feeds them. Are you not much more valuable than they?
Matthew 6:26