Elgibbor: The Path of Suffering 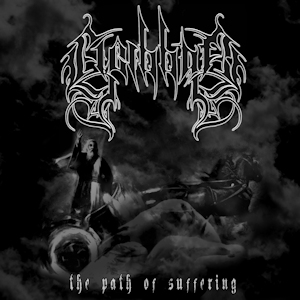 I tried to come up with an interesting lead in for this review, but I am so excited about this release that I just want to get to talking about the album. Elgibbor’s latest album, The Path of Suffering, is perhaps the best (un)black metal album I have heard in years! This is a slab of old-school black metal with a few ambient inflections in the spirit of Graveland, Darkthrone, and early Emperor. While previous Elgibbor albums have been solo works by Fire, he is joined on this release by Armath Sargon on keyboards and Thündermørr on drums. (The three are currently involved in another project called Katumus; Fire and Armath Sargon have also worked together in Armath Sargon and Knights of the New Temple).

After the (seemingly obligatory) ambient introduction, Elgibbor delivers a wall of sound on “Embrace Life (or Death)” that should hook any black metal fan. There is no “core” here and no symphonic elements either; just pure atmospheric black metal goodness. The acoustic introduction to “Conqueror of the Nations” creates suspense and allows listeners to catch their breath before Fire’s scream brings them back into the sonic tsunami. “You Are Never Alone” is a slower, dare I say mellower, song that is a more intimate message to the listener: when we feel alone and afraid, “then may God’s Spirit brood over you, whispering your name, reminding you that you are never alone, and that God Himself is for you.”

The album resumes the black metal onslaught with “Blessed Are You, O Lord” and “Psalm 140,” two of the five songs on the album taken directly from Scripture. “Wyciagnieta Reka” stands out as the only non-English song on the album, although the liner notes do provide a translation. (A special thanks from all of us non-Polish speaking fans!) It is in in many ways the lynchpin for the album, as it is the song that describes sitting in darkness and asking Him to deliver from that darkness and send light into our lives. There is something different about the production on this song, in that it sounds more like the demo-quality sound typical of early black metal recordings. It is not a negative and really only stands out because it is different from the rest of the album. After one last blast of pure black metal in “Restore” and the folk-metal flavored “Reassures,” the album rounds out with “Outro Revelation,” a reading of Revelation 22:12-17 in Hebrew over an ambient background.

In many ways, this is a concept or theme album. It begins with a call to make a choice: life or death, light or darkness, God or Satan, heaven or hell. It then proceeds to make the case. God is our refuge on the path of suffering. We live our lives in fear and anger, mad at the world and wondering if this is as good as it gets. The answer is no, God wants to set us free from fear and anger and hatred. He is always with us, never deserting us and always standing for us. How incredible is that! How incredible is our God! At this point, the choice is made: Deliver us, O Lord, from the evil of this world! Be our strength and deliverer. Take me out of the darkness and fill me with your Light. This is followed with three songs of God’s encouragement to the believer: God will fight for us and will deliver us from the hands of the Enemy. The album concludes with a return to the beginning, an invitation to come and drink the Water of Life.

Production-wise, the album should be muddy enough to satisfy black metal purists, with the vocals back in the mix enough so that they are part of the overall texture and not the dominant sound. The keyboards are subtle, and are more sensed than heard most of the time. Fire’s vocals are textbook black metal shrieks and screams. The vocal filter gives the effect of the vocals coming into the music from another place, perhaps even another time. The buzzsaw guitars create a near-constant barrage of sound. Thündermørr’s drumming mixes the expected blast-beats with some complex and progressive rhythms that add another dimension to the sonic framework. All in all, this is a complete and consistent (un)black metal album—so much so that I found it was easy to get lost in the aural experience and not realize the passage of time. Do yourself a favor and pick up this album. Better yet, pick up one for your Mayhem/Darkthrone/Emperor loving friend too.

However, I consider my life worth nothing to me; my only aim is to finish the race and complete the task the Lord Jesus has given me—the task of testifying to the good news of God’s grace.
Acts 20:24