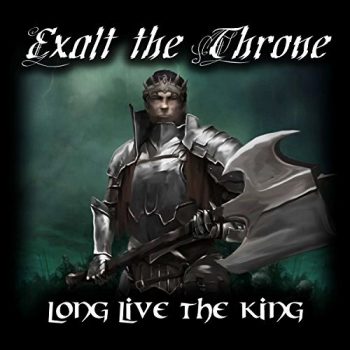 Long Live the King is the debut album for the Texas-based melodic death metal band Exalt the Throne, and I for one am hoping it is the beginning of a long life for this band.

Musically, this album is solid, filled with old-school death metal riffing, shredding solos, and steady drumming to bind the whole structure together. Vocally, the band employs the “beauty and the beast” style, contrasting Kanyon Loyd’s growls with the classically-oriented vocals of band newcomer Courtney Johnson.

This is an album I was looking forward to since I heard the first samples, and I was not disappointed. Long Live the King delivers a great balance of brutality and melody. The one complaint I have with the album is the treatment of Johnson’s vocals. I chalk this up to “growing pains” as the band transitions from straight death metal to a band with more symphonic elements. There is a tendency for her vocals to either get lost in the mix, particularly when singing in the lower registers, or to sound like they have been superimposed after the fact. There is also a tendency toward static, recitative-like vocal lines. The strongest songs on the album, in my opinion, are the songs where Johnson is singing more aria-like melodies that allow her to use her full vocal range, like in “Disposal of Wasted Flesh.”

One of the musical highlights of the album is “Something Brutal This Way Comes” for the way the music and the vocals meld together with Johnson’s vocals soaring above the riffs and growls, creating a lot of space for all the voices and instruments. The title track features Johnson harmonizing with herself, which is a nice musical effect.

Overall, again, this is a great album that really delivers in its melodic brutality. I am excited to hear what the follow-up to this album sounds like, because in my opinion, Exalt the Throne is poised to make a lot of noise in the Christian metal world and beyond.

I will refresh the weary and satisfy the faint.
Jeremiah 31:25

Can a man walk on hot coals without his feet being scorched?
Proverbs 6:28