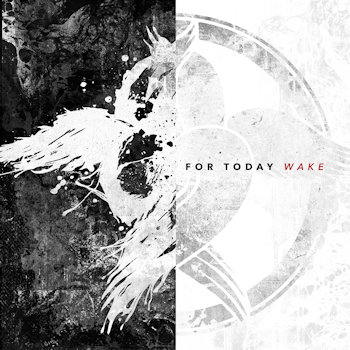 The year 2015 was an eventful year for the American metalcore band For Today. Vocalist Mattie Montgomery was accused by former guitarist and co-founder Mike Reynolds being affiliated with a cult. Subsequently guitarist Samuel Penner was kicked out of the band because he wasn’t Christian enough. Fortunately part two of the year was more successful. The band signed with metal giant Nuclear Blast records and recently released their first album on the label.

The album kicks off with No Truth, No Sacrifice and what is immediately striking is that the production of the album is top notch. A lovely full sound of heavy guitars, a rumbling bass and drums punch are just mindblowing. You asked for it and they delivered; Metalcore at its best. With Broken Lens For Today are getting in full speed. The tempo is cranked-up to the max.
The next couple of songs, Forced Into Fire and interconnecting Deserter, are probably the best songs on the album and also characterize the dynamics of the album. The band seems to switch effortlessly from heavy metalcore riffs and raw screams (Forced Into Fire) to a more melodic sound with clean vocals and screams are intertwined (Deserter).
After the mediocre song Bitter Roots, which forces a ballad song into a metalcore ending, the band seems to find themselves again and comes back strong with Wasteland, Determination and Flooded Earth. The latter starts risky with a minute long quiet beautiful piano intro, a sound that finds its way back again in the second half of the song.

The tone of the album is dark, the guitars are full and heavy and the vocals are raw. The lyrics seem to have gotten a different writer perspective. Previous albums had more obvious christian lyrics. Wake seems to have been written within a broader world perspective, but still from a Christian point of view. It is clear that the band has been growing over the years. In this reviewer’s opinion,Wake is probably the best album the For Today has released to date.

Dear children, let us not love with words or speech but with actions and in truth.
1 John 3:18

Wives, submit yourselves to your husbands, as is fitting in the Lord. Husbands, love your wives and do not be harsh with them.
Colossians 3:18-19