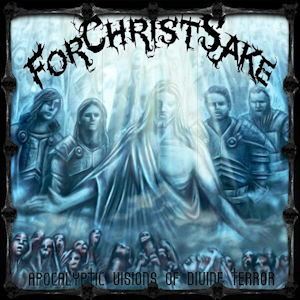 ForChristSake is a ‘Unblack’ band from Belfast, Northern Ireland, with a line-up that consists of Ignatios on drums/ vocals, Mark on bass, Simon on lead guitar and Ben on guitars/vocals. The band recorded a 4 track EP entitled ‘Death is but a Breath Away’ between 2009 & 2010 on their own. The Debut album and first ‘Unblack’ release for Roxx Records, “Apocalyptic Visions of Divine Terror” has finally been released 7 months after its original release date. Was it worth the wait? I say yes!

I’ll take a moment to note my ignorance of ForChristSake’s history within the Unblack realm of Christian Metal. I have always heard of them, through outlets like Untombed Webzine and other websites, but I had never taken the time to listen to them. So when given the opportunity to write a review on the album I jumped at the chance to leave my comfort zone of Christian Rock and Hard Core/Metal Core, and give it a listen along with my honest review of this CD.

The CD starts with a great opening Instrumental to prepare you with what’s to come………riffs and drums that will leave you headbanging! The track that really drew me into listening to this CD over and over during my workouts is Track 5, “Deliver us from Evil”. Parts of that song reminds me of Mushroom Head (If you’re familiar with the secular group) with the dark growling vocals and then a sinister, melodic Chorus screaming out the title of the track. The song really packs a punch.

With 16 tracks there is plenty of thrashing music to keep you busy. Lyrics are spiritually filled and true and forward of the music itself. Honestly all the songs on the CD are brutally hardcore in their own ways. I can hear glimpses of Old School Thrash and its roots in many songs, from the micro guitar solos and plucking of the metal bass strings to the double bass drum solos, they all work. A prime example of this is the track “Inhalation Asphyxia”. All those elements were implemented in that song. Other songs like “Deification” implement the operatic-like vocals in the chorus with the sound of “DooooooooM” closely following.

As I’ve said before in past reviews I like to gauge an album on how it keeps me motivated during workouts and this album definitely did that. I was pleasantly surprised at how much this CD grew on me. As I said before, I am not a big listener of ‘Unblack” music, so I was skeptical, but, I am very glad I took the time to listen for a couple of weeks and get a true understanding of what ForChristSake’s music has to offer. You can tell a lot of heart and time spent in prayer went into this effort.

I can do all this through him who gives me strength.
Philippians 4:13

For this is what the Lord has commanded us: “I have made you a light for the Gentiles, that you may bring salvation to the ends of the earth.”
Acts 13:47