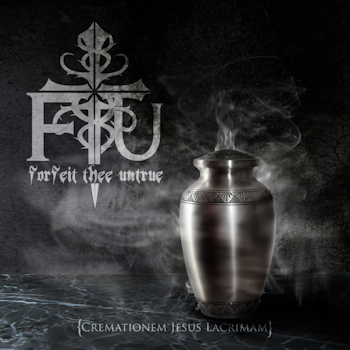 Ok, I’m just going to say this up front: I don’t think there is a label in the Christian music industry that is consistently putting out more quality metal releases right now than Rottweiler Records. As evidence for my claim, I give you the label debut of South African band Forfeit Thee Untrue.

Cremationem Jesus Lacrimae is a musically-diverse offering filled with crushing riffs, intelligent lyrics, and even some blistering guitar solos for those of us who still like those things. The album opens with a recitation of Genesis 1:1-4 over an atmospheric keyboard/strings/drum background. The calm is shattered by the screams of “Let there be Light” to open “The Mirror That Hates,” the perfect opener as it is a microcosm of the music of the whole album. It features a Demon Hunter-esque metalcore style with an interplay of extreme and clean vocals, tight, heavy riffs, contrasting verses and choruses, an acoustic closing section, and even a little progressive touch with the irregular meter feel ahead leading into the guitar solo. The continuity of the main part of the album works really well, contributing to the concept album idea. Guest vocalists Robyn Ferguson (Adorned in Ash), Ryan Kirby (Fit for a King), and Brandon Pratt (Red Helen) add their unique voices to “Fractured God,” Seven (Pt.2),” and “As the Wicked Wander.” The two ballads, “Sermon of a Dying Atheist” and “Lucifer’s Lullaby” are moody and introspective, not syrupy and sappy. “The Dagger Held by Mary” is just a brilliant work, but I’m a sucker for plainchant. I’ve got to say that musically this is one of the most satisfying albums I’ve heard in a while. Forfeit Thee Untrue put together a collection of songs that connect well stylistically without being monotonous.

There are a couple of things I want to mention regarding the album’s lyrics. First, overall they are very dark. After opening with a reading from Genesis 1 that culminates in God bringing light into the world, the album proceeds to explore the darkness of the world through songs that speak of hopelessness, despair, suicide, eternal separation from God, spiritual abuse, and death. In many cases, a casual listen may give the listener the impression that this is yet another nihilistic metal band rather than a Christian one, but this is by design. The album title, Cremationem Jesus Lacrimae translates to “The cremation of Jesus’ tears,” the theme that carries through the album through songs that deal with those conditions that grieve the heart of God before reintroducing the Light as the album comes to an end. It is a concept approach that works very well for this album. The final song in the story, “Seven (Pt. 2),” brings us full circle with its closing words — “let there be Light!”

A second lyric issue I feel like I need to bring up is that this album may not be for those who are sensitive to even the hint of profanity. There are a few instances where the band uses wording that may strike listeners as offensive, such as referring to Satan as the “God-damned enemy,” which, while it is the most Biblically-sound use of the phrase imaginable, may bother some listeners. In another song, the lyric says “You try like Hell to mask me.” This is a song sung from the perspective of a personified sin, so again, it seems appropriate to me. Personally, I don’t find either of these to be a problem, but I felt like it was important to point this out for the sake of those who might.

The only real complaint I have about the album is the way it ends, and I am quite willing to admit it may just be a “me thing.” Like I said above, the album is a sort of concept album that takes the listener on a journey from darkness to light. The album’s story builds to its conclusion through “The Dagger That Mary Holds,” “Black and White (In a World of Grey), and “Seven (Pt.2),” and if that were the end of it, the drama and energy of the album would have been handled perfectly. As it is, however, there are two final tracks that are alternate versions of songs that appeared earlier in the album. To me, it just seems like we reach a point of victory, but then go back to rehash what it was like before. While I normally think the more music the better, in this case I think the extra tracks detract from the album rather than add to it.

All in all, this is an excellent album from a band I look forward to hearing a lot more music from. When I write these reviews I typically listen to the album so many times that I really don’t want to listen to it anymore by the time I’m finished. This album, however, is one that I keep pulling up and listening to frequently, and I like it more each time I listen. There’s a lot in this album to digest and I imagine Forfeit Thee Untrue has a lot more to give us.

But the Lord is faithful, and he will strengthen you and protect you from the evil one.
2 Thessalonians 3:3

My soul yearns for you in the night; in the morning my spirit longs for you. When your judgments come upon the earth, the people of the world learn righteousness.
Isaiah 26:9