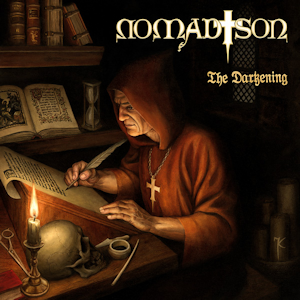 Malta’s rising doom masters Nomad Son have unleashed their newest album – The Darkening.  Consisting of nine songs, it’s a great doom metal assault.  One of the first things that you notice on this album  is how up-front the keys/organ are, as opposed to their previous releases, which isn’t a bad thing.  On the contrary, the keys/organ really add to the atmosphere of the entire album.  Also, it’s a mix of slow, plodding songs along with faster, sometimes even chaotic arrangements.

-The album starts off with “Light Bearer”.  It’s a faster tune but with the foreboding and feeling of doom – as Sanctus Gladius Radio DJ Necromanicide calls “Speed Doom”.  The song itself deals with Lucifer and his fallen state.  The mix of fast and slow tempos makes for a dramatic feel.
-“Age of Contempt” is a mid-paced tune.  The opening of the song with the keys almost sounds like something from The Munsters – an almost gothic-feel.  In the middle of the song, the band speeds up with total abandon.  You almost can’t help but headbang to the music.  The last part of the song returns to its plodding motif.  This is easily one of the best songs on the album and really shows the talents of the band.
-The band then goes into full doom mode with “The Devil’s Banquet”. Not only is the music trudging but the lyrics are dark – dealing with the hopelessness and spirit-crushing; brought-on by the devil on us here on earth.
-“Only The Scars” is up next with its tormenting lyrics and crushing music.  Once again you have the middle section where it speeds up before crashing back to the ground with its original slothful pace.  They have really mastered this style.
-A chaotic opening gives us “Descent to Hell”.  It almost feels like you’re going headlong into hell with the opening motif.  The song itself is a telling of wars past – brave souls defending their homeland at all costs.
-The self-titled track “The Darkening” is a heavy groove-oriented song with some amazing riffs by guitarist Chris Grech.  It borders on being progressive doom like Veni Domine or Faith.
-The next song is one of the more intriguing tracks.  The music itself is interesting as it starts off with the keys playing a brooding melody before the rest of the band joins in two minutes later.  The lyrics are based on Roman historian Suetonius’ De Vita Caesarum (The Twelve Caesars) chapter 4 – Caligula.  The song describes the crazed Roman emperor – “There cannot be greatness without madness”.
-“Orphaned Crown” is another full-on doom track.  Not only is the music heavy and trudging but the lyrics are dark as well.  The lyrics tell how we’ve put science over faith – “Worshiping the atom. Demonizing faith. Paraplegic freedom.  Killing to create.”  But it also states that soon the “Archetype” shall return to reclaim “his orphaned crown” to reign again.
-Lastly, the album closes out with “Epilogue” which is an instrumental similar to “Delirium” from their first album First Light.

Overall, this is a solid album by these Maltan doom masters.  They’ve upped their game from their previous album and have topped it.  If you love doom metal, you’ll definitely want to get your hands on The Darkening by Nomad Son.

Praise be to the God and Father of our Lord Jesus Christ, the Father of compassion and the God of all comfort, who comforts us in all our troubles, so that we can comfort those in any trouble with the comfort we ourselves receive from God.
2 Corinthians 1:3-4