One Bad Pig: Love You To Death 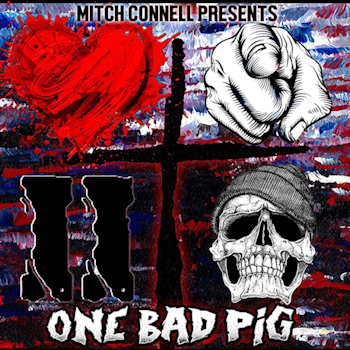 There has probably been no album in the past year that I have been looking forward to more than One Bad Pig’s Love U To Death. I’ve been a huge fan of this band since I walked out of Zondervan’s with Smash in 1989, and seeing them perform live at The King’s Place in Reynoldsburg, Ohio on the I Scream Sunday tour was one of my best concert experiences. How can you top getting sprayed with silly string, watching people on stage diving into a kiddie pool ice cream sundae and some guy getting a free hair cut during a guitar solo, Kosher’s intercessions during “Spirit of Murder”, and the awesome worship experience of “Wholly My Lord” to wrap things up? But then they broke up and went on with their real, non-Pig lives. Now they are back, and I was so excited counting down to the release of this album, and a little nervous too. Could they retain that essence of what made One Bad Pig so different from everything else thirty years after A Christian Banned?

Overall, the album is exactly what fans should expect: a solid, fun punk album. It has the characteristic serious message wrapped in humor, but it feels more “mature.” The song “Teenage Royalty” definitely comes from guys who have lived through their children’s adolescent years. “Footwashin’” has a fun Texas two-step feel and celebrates the practice of washing feet in the church. “It’s Not Pig Latin” delves into the realm of speaking in tongues. “Sunday Skool Rawk” is a fun Pig-style medley of classic songs many of us who have grown up in church have known our entire lives. Then there is “Ben Moors,” the ode to a guy who pledged a lot of money to have the band write a song about him. On any other album it would really be out of place, but on a One Bad Pig album, it is somehow a perfect fit.

I know others disagree, but in my opinion, the two biggest shortcomings of this album are the cover of the 77s classic “The Lust, the Flesh, The Eyes & the Pride of Life” and Les Carlsen’s guest vocals on “Get Your Hands Dirty.” The band has done covers in the past, most notably Petra’s “Judas’ Kiss” and Johnny Cash’s “The Man in Black,” but in those cases the covers are punked up Pig style. This time around they seem to be staying too true to the original and it just feels mediocre to me. And I love Les’ voice, but the rough style he’s using to sound gritty makes me think feel like I’m listening to Bobcat Goldthwait at times. I know I call them “shortcomings,” but they do not detract too much from the enjoyment of the album.

Overall, this is a wonderful album. There’s a lot of good music, a lot of thought provoking lyrics, and a lot of fun. I just hope we don’t have to wait another 25 years to hear more new music from this band.

[Get Connected with One Bad Pig]
website// www.OneBadPig.com/
facebook// www.facebook.com/OBPforever/
Purchase: One Bad Pig: Love You To Death

Make every effort to keep the unity of the Spirit through the bond of peace.
Ephesians 4:3