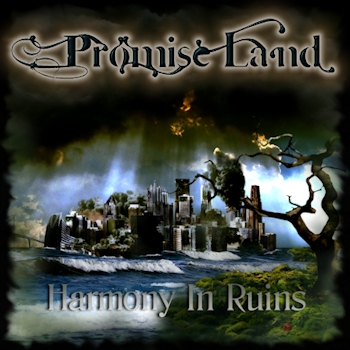 High atop many “Most Anticipated Albums of 2014” lists has been the first full-length album by Pittsburgh, PA-based trio Promise Land. Harmony in Ruins does not disappoint.

One of the things I like best about this album is that it does not provide an easy answer to the question “who do they sound like?” I hear bits of similarities between the music on this album and music by bands like Tourniquet, Saviour Machine, Symphony X, and even a touch of Nightwish (sans the female lead), but rather than sounding like clones, Promise Land creates its own sound.

One of the defining characteristics of this band is its vocals. While Rod Kozikowski is listed as the primary vocalist, Promise Land actually employs a dual-lead approach. Typically when bands use two vocalists, they have at least somewhat contrasting styles; for instance, the low/high combination of Guy Ritter and Gary Lenaire on the early Tourniquet albums or the “beauty and the beast” style common in symphonic metal nowadays. The interplay between Kozikowski and second vocalist (and primary songwriter) David Michael have very complimentary styles, so much so that it would be easy to assume it was the same vocalist. This distinctive vocal counterpoint is evident in the album’s first vocal track, “C.I.U.” This is an amped-up version of the song “Christ in Us” from the band’s 2005 demo. Throughout the album, Janette Ralston contributes backing vocals that are subtle, but contribute a great deal to the harmonies.

Instrumentally, Harmony in Ruins relies heavily on Michael’s skills as he was responsible for all the guitar and keyboard work on the album. He infuses his technically-intricate guitar riffs and melodies with an emotive quality that enables them to become a wordless contributor to the narratives of the songs, as can be heard in songs like “The Piper Illusion” and the remixed-and-remastered version of the band’s 2010 single “Hiding Place.” The keyboards provide some harmonic fills throughout the album, but mostly they are there to emulate the orchestral sounds to fill out the symphonic metal sound. The drums on the album are performed by Eric Bowser, who seems to find the perfect approach regardless of whether the track is more metal or more symphonic. There is a complexity there that makes the drum parts more than just standard rhythms, but not so much that they compete with the other parts. 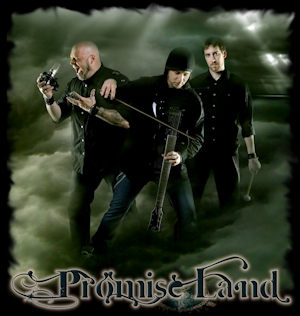 For me, however, the musical highlight of this album are Michael’s orchestrations, which are showcased most in the album’s four instrumental tracks. The two-song instrumental introduction (“In the Beginning” and the title track) is a bold choice, but it works. The two songs flow easily into each other, creating a two-part overture of sorts. “Leviathan’s Voyage” is a dramatic orchestral track that sounds like it would come from the soundtrack of some big-budget epic film about an ocean voyage or seafaring warriors. Seriously, it is that good. The final standard track on the album, “Eclipse,” is like an outro that bookends the album. While these tracks are really good, it is perhaps the album’s two bonus tracks that really show off how wonderful the orchestrations are. The first bonus track is a purely orchestral version of “Harmony in Ruins.” I enjoy the classical/metal juxtaposition in the official track, there are a number of really nice orchestral parts that are clear in the bonus version but are lost behind the guitar in the main version. The other bonus track is an instrumental version of “Hiding Place,” which really demonstrates the care Michael put into the instrumental elements of this album. Typically, when the vocal parts are stripped from a song, that song really loses something. I recall looking forward to hearing the vocal-less versions of the songs from Tourniquet’s Antiseptic Bloodbath and being disappointed because as talented as those musicians we, it was clear that the instrumental parts existed primarily to support the vocals. That is not the case with Harmony in Ruins. As illustrated by thisparticular track, the instrumental accompaniments are interesting enough in their own right to work as stand-alone tracks.

Lyrically, Harmony in Ruins is reminiscent of a band like Theocracy that presents bold, uncompromisingly Christ-centered lyrics without resorting to clichés, pandering, and triteness. Many of the songs rely on narratives to drive home the diverse themes. The album includes songs about the urgency of sharing Christ with a world in need (“C.I.U.”), the deceptive schemes of Satan(“The Piper Illusion”), suicide(“Before the Dawn”), sex trafficking(“Her Name”), and the holiness of God(“Holy”). Perhaps the stand-out track on the album (if it is possible to even begin to pick one) is “Hiding Place,” which recounts the story of the modern-day Christian “hero” Corrie ten Boom.

If this album has a weakness, it would be the continuity between the instrumental tracks and the ones that follow. The transition that bothers me most occurs between “Leviathan’s Voyage” and “Before the Dawn.” “Leviathan” builds in intensity over the two-and-a-half minutes of soaring brass, driving violins, pounding drums, and crescendoing cymbals, culminating in a dramatic silence and a final timpani roll emulating rolling thunder. To my ears, this is setting up the entrance of something big, but instead we get “Before the Dawn,” which is the closest thing to a ballad on the album. Perhaps this is just my taste and mindset coming into play here, but I think having “Leviathan’s Voyage” lead into the heavy worship track “Holy” is a more musically and emotionally satisfying sequence. The transition is similar between “Harmony in Ruins” and “C.I.U.,” but I think the overture-like nature of those opening tracks allows the piano introduction to “C.I.U.” to stand on its own rather than seeming like it should flow from the previous track.

That being said, it is difficult to imagine a more completely satisfying album. David Michael’s songwriting is bold, sometimes confrontational, and passionate. The stories he tells in the songs draws listeners in and make us feel a part of the narrative. The accompaniments and orchestrations are realized nearly flawlessly and cooperate with the vocal presentation in conveying the emotional qualities of the lyrics as well as creating their own layers of meaning in the case of the purely instrumental tracks. I hope this band is up for a challenge, because it will be difficult for a sophomore album to match this quality, let alone surpass it. I look for this album to sit atop many “Best of” lists for 2014.

And I will do whatever you ask in my name, so that the Father may be glorified in the Son.
John 14:13

In their hearts humans plan their course, but the Lord establishes their steps.
Proverbs 16:9