Swiss doom master Pÿlon has unleashed their newest album – Homo Homini Lupus.  The album has some standard Pÿlon institutions – a cover song, an instrumental and a song that’s over nine minutes long.  But with this album, a lot has changed.  Oliver Schneider of Minsk Security joins the band on guitar in place of Andy La Morte; Reito Hardmeier from Punish takes over the bass with Jan Thomas’ departure; and most importantly Jordan Cutajar handles vocals while Matt Brand drops the vocals/guitar for just guitar. 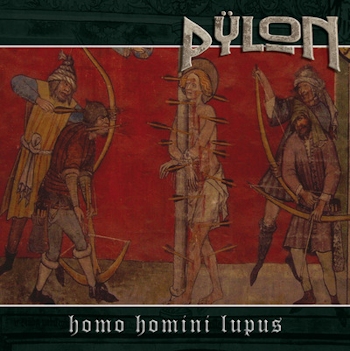 The band has changed so much, I had to make sure I was listening to the right CD.  The sound from the opening riffs until the final fade out is much more aggressive than anything they’ve previously done.  But you can still hear some of Matt’s underlying foundation that is what makes Pÿlon the band they’ve been known as all throughout the album.  With Jordan’s vocals, it’s almost like a mesh of the crushing sounds of Pÿlon, the aggressiveness of Nomad Son and the epicness of Forsaken.  The opening track “Crowned” and the instrumental “Ils Se Donnent Du Mal” are prime examples.  The guitars start off in-your-face and then clip along at a fast (for doom metal) pace with the bass and drums.  But they are definitely able to slow things back down like with “Saligia” – which has the Pÿlon sound to it – and “Al Ha’har” – which even has some actual Irvit spoken parts.  For those wondering, “al ha’har” translates to “to the mountain”.

Lyrics, the songs are pretty typical for the band.  “Crowned” is actually a re-arrangement of Psalm 103.  “The Curse of Eden” is a song about the end times.  And “Cruficer” deals with the crucifixition of Jesus.  But songs like “Saligia” and “Al Ha’Har” are bit more complex.  But it’s the choice of their cover song and the guest musician that really stand out to their previous albums.  On their album Armoury of God, they did a cover of a Candlemass song (“Somewhere in Nowhere”) and on The Harrowing of Hell they covered Black Sabbath’s “Paranoid”.  But this time they covered a non-doom band.  They covered Slayer’s “South of Heaven”.  And not only that, but they had a guest musician on the cover song.  Previously, they had guest musicians play on their regular tracks but they changed things up for this track.  They had Stryper bassist Tim Gaines join them for their cover of “South of Heaven”.  In typical fashion, they slowed the song down a bit similar to what they did with “Paranoid”.  I have to say that I was surprised not only by the choice of songs but also by the guest musician.  But they really pull off the cover very well.  It doesn’t really sound too out of place or forced.

Overall, this album by Pÿlon is a bit of surprise but it’s definitely a good surprise.  I think we expect even more from the band on their next release.

Whoever believes and is baptized will be saved, but whoever does not believe will be condemned.
Mark 16:16

Every good and perfect gift is from above, coming down from the Father of the heavenly lights, who does not change like shifting shadows.
James 1:17