Saint: Broad is the Gate 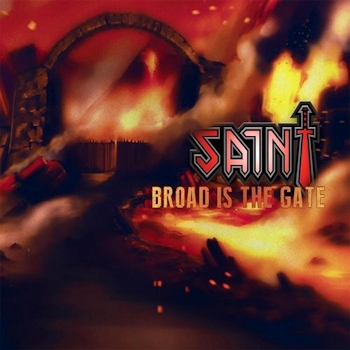 I have to think that of all personnel changes a band could go through, replacing the lead singer has the greatest impact on the band’s sound. No disrespect intended to the other musicians, but the sound the vocalist contributes is the one part of the band that cannot be so easily replicated. So when Josh Kramer announced he was leaving Saint in 2012, there were a lot of questions about what a Saint fronted by Brian Phyll Miller would sound like. Yes, he did sing the title track to the Saint’s 2012 album Desperate Night, but there is a huge difference between doing guest vocals on one track and being “the guy.” Well now we know thanks to the band’s “Jugulator” (since Saint has always had to live with the Judas Priest comparisons), Broad is the Gate.

With the opening riffs of the title track, it is obvious that nothing substantial has changed. I admit it was a little jarring to hear a voice other than Josh’s enter, but I was quickly able to adjust and soon found myself enjoying Brian’s vocals every bit as much as his predecessor’s. With each song, I was pulled in more and more to the new Saint sound. Practically everything about this album is top-quality and I can’t find anything that I would describe as a “throwaway” song. I really only have two complaints. First, the nine songs on the clock in at 31:22–pretty short. With the ability to easily fit twice as much on a CD, I know I’m not alone in feeling like we should have gotten more for our money. Even if there were no more new songs ready, why not dust off a few songs from the band’s “classic” era to showcase what Brian can do with the old material. The second complaint is in regards to the final song, the instrumental “Metal Cross.” The musicianship on the track is excellent, but as it is not only the final track, but also the shortest at 1:37 (yes, I know the track listing shows 1:43, but my time is when the music stops), it really feels like filler. If it were longer, say in the 3-4 minute range, it might not feel the same way, but as it is it just as it gets you hooked, it is over. It also might work well as a lead-in to another song if the ending were tailored to that purpose, but since it just abruptly stops, it really feels like it was something they had recorded in the studio that was added to the album as an afterthought.

The bottom line: this is nothing more or less than a new Saint album. It has the same heavy riffs, powerful vocals, and in-your-face, Christ-centered lyrics we have come to expect from these guys. If that is what you are looking for, you’ll love this album. It may take a listen or two to get used to the new vocalist, but he’s a solid singer that gives the band much room to grow. If, however, you are tired of the same ol’, same ol’ from Saint and were hoping for a new direction with this album, then you are going to be disappointed. I will say that the penultimate track, “Never Same” does show the band dipping its toes into the waters of symphonic metal, so perhaps we will see more of this from Saint in the future.

Either way, it seems Saint is equipped for a strong future. I would love to give this album a perfect rating, but the length and the lackluster finale leave me a bit disappointed.

A gift opens the way and ushers the giver into the presence of the great.
Proverbs 18:16