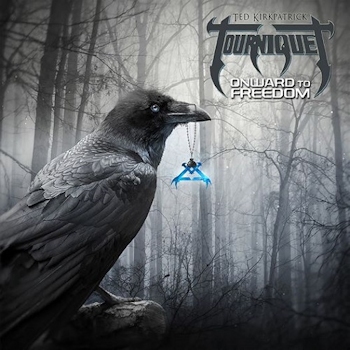 First and foremost I want to thank Ted Kirkpatrick for sending me this album and allowing me to review it for Untombed Webzine!

It’s been 2 years since we last heard from Tourniquet, with the release of their album, “Antiseptic Bloodbath” in 2012. Now, Ted and company has blessed us with a spectacular, new compilation of songs that are sure to cure ones’ need for more music from this band! But if you’re looking for a truly “Tourniquet” effort, you won’t be receiving it here. Aaron Guerra, Luke Easter and Bruce Franklin only make some brief performances, but don’t be saddened, or disappointed; be happy for what you are about to receive, in the form of “Onward to Freedom”!

With the special guests that are on this CD you can’t help but get all giddy like a kid on Christmas morning! I mean c’mon.. Marty Friedman, Chris Poland, Bruce Franklin, Tony Palacios, and Rex Carroll ripping the strings! Guest vocalists include Doug Pinnick, Gabbie Rae, Kevin Young, Blake Suddath, Nick Villars, Mattie Montgomery and Michael Sweet. Ed Asner also made a special appearance by giving a great narration during ‘The Noble Case for Mercy’.

This leads me to my next comment that this CD should’ve been put out by “Tourniquet & Friends”, much like Ken Tamplin did back in 1990 with his album (Tamplin and Friends) “Axe to the Grind”. But nonetheless my opinion of what it should’ve been called should not take away from what Ted Kirkpatrick has created with “Onward to Freedom”. Those that are long time fans know that Tourniquet has always stood up for Animal Rights and this entire album is dedicated to that cause.

I’ll give a track by track break down of the actual songs with vocals.

Mattie Montgomery brings guest vocals to ‘Onward to Freedom’ & ‘The Slave Ring’. ‘Onward to Freedom’ also has Michael Sweet on vocals. [Official Lyric Video below] This song could really be 2 songs because it really has two parts to it. Michael sings the more melodic side to the song which is vintage Michael Sweet, then it completely changes into a dark metal-core range with Mattie blasting out his voice for his part. I would’ve loved to have seen some kind of migration between the two singers. But I really like it and it is a great first song for the album.

I have to say that ‘The Slave Ring’ is probably one of my favorite Mattie Montgomery led songs that I have heard, and that even includes “For Today” songs. Chris Poland shows why the early days of Megadeth were so musically hard core! Nick Villars shares some eerie vocals during the chorus that make the song that much better!

All the songs and short bits really delve deep into the cruelty and abuse that animals, all over the globe, suffer daily. Gabbie Rae does a great job with her truly melodic vocals on ‘Let the Wild just be Wild’ and Nick Villars screaming vocals closed it out with Rex Carroll’s trademark solos coming through for this song.

I was surprised when I heard Doug Pinnick was going to be the vocals behind one of the songs and ‘No Soul’ fit his range perfectly. The song itself had a King’s X feel to it, which I think will help to invite others into the song as well. The song has a sad, bluesy feel and Bruce Franklin lends his playing to this song very well.

‘If I had to do the Killing’; I had my suspicions with this song before I heard it but oh my! Kevin Young can sing it people! I had forgotten how great the lead singer for Disciple can be vocally. He brings this song home with his vocals and Aaron Guerra just jams it out. Definitely one of my favorite on the album!

This is just the song you would expect on a Tourniquet album, ‘Stereotaxic Atrocities’. This is actually the first song I heard from this album, due to my player being on shuffle. I had to do a double take because I thought I was listening to Hangar 18 for a second. Yes Marty Friedman is awesome and will always be one of my favorite guitarists. Luke Easter’s voice never sounded better and this song, vocally, brought me back to the old days of Tourniquet!

‘Drowning in Air’ features Nick Villars and Blake Suddath on vocals, and they both show why the Midwest is one of the home stays for successful Hard-core bands recently. Really powerful performances! I’ve never heard Tony Palacios play so heavy in a song before either, which really impressed me.

The final song really closes out the message that Tourniquet wants to convey about Animal Rights, and fittingly Gabbie Rae gives a great performance on ‘Cage 23’. The song deals with the reality that even I experienced as child, about going to an animal shelter and seeing the animal that you fall in love with and you want to take home. In my case I was told that we needed to go home and think about it, which broke my heart. When we returned, the animal was already gone. At least in my case the animal was adopted and saved. That is not the case in this song. So the song has a personal meaning to me.

What a great album! All the performances were solid and I don’t see myself becoming tired of it anytime soon. I tried to give a track by track explanation as to how each individual guest lend their set skill and I hope it helps! I hope that Tourniquet, the band, can get together to put out an entire CD with all the band members soon. For we the fans want it!!!!

Rating: 4 out of 5
Reviewed by: Tom Metcalf

The grace of the Lord Jesus Christ be with your spirit.
Philemon 1:25

He has saved us and called us to a holy life—not because of anything we have done but because of his own purpose and grace. This grace was given us in Christ Jesus before the beginning of time.
2 Timothy 1:9