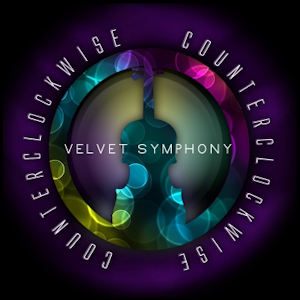 Velvet Symphony is the work of Ed Melendez, a composer, arranger, and pastor of worship arts at Hannaford Street Bible Church in Helena, Montana. Its debut album, Counter Clockwise, is comprised of ten instrumental, “art-rock” tracks. I must confess that the “art-rock” label is difficult for me because it is such an amorphous label. It brings to mind the progressive rock of King Crimson, ELP, Yes, Henry Cow, Van der Graaf Generator, and early Genesis, as well as later groups like Kansas, Styx, and Rush. If that is what you also have in mind, you want Proto Kaw, not Velvet Symphony. If, however, you want to experience a solid guitar-oriented instrumental album in the vein of George Benson or maybe even Steve Vai, look no further.

Counter Clockwise has a definite 80s new age/smooth jazz sound through most of the tracks. I played it for a friend who is a huge prog-rock fan, and he heard touches of 80s-era Yes along the way, particularly the final track, “Metal Circus.” Personally, I thought “Horizon” sounded a lot like the Wyld Stallyns music from “future” San Dimas in Bill and Ted’s Excellent Adventure. Overall, the album reminded me of the instrumental music that was played before concerts I attended in the 80s and early 90s, music that was there and set a mood, but was not really the focus. I think that was the most disappointing element of this music: I wanted it to reach out and grab me, but it just wanted to play through and if I did not want to engage it that was fine.

Melendez considers each song to be a self-contained story that begins with a riff and transports the listener to a different place by the end. I hear that on some of the songs, but most of the songs use some sort of return form, so they take the listener on a journey that also leads them back home. I think those might be my favorite songs from the album because they sound more complete to me. The other songs are good as well, but they just seem like they just stop or that there was more to be explored with that riff and melodic material.

I must confess that this was a difficult review to write. I do like the album and will most likely listen to it quite frequently, but I will listen to it because it provides a pleasant aural wallpaper for other activities and not because I’m dying to hear these songs. The musicianship is excellent, and the songs are generally well crafted, they just do not demand that the listener focus on them or take the mind away from doing other things.

Rating: 3.5 out of 5
Reviewed by: Eric Strother

And so we know and rely on the love God has for us. God is love. Whoever lives in love lives in God, and God in them.
1 John 4:16