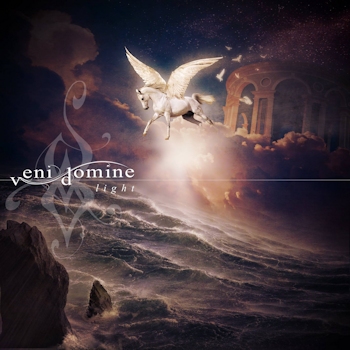 Prog doom metal masters, Veni Domine, have released their seventh and sadly final album – Light. But it’s obvious that they went out with one last solid album. And considering some of the track names – “In Memoriam”, “Farewell” and “Where The Story Ends” – it makes sense that it’s their last great effort.

The album clocks in just over an hour with eight of the nine tracks each over six minutes long (the fifth song “Preludium” is an instrumental that’s only a minute and a half long). What’s interesting is the final track – “Oh Great City” – which is a new take on the song which they originally recorded for their first album Fall Babylon Fall. The song itself sounds quite a bit different from the original but you still know that it’s Veni Domine.

On the album, vocalist Frederik Sjöholm sings most of the songs in a mid-range. He doesn’t hit the high notes as much as he used to on the first albums but his vocals are still as solid and recognizable as ever. The band is in top form as well.

“The Hour of Darkness” is an exemplary Veni Domine tune – brooding and haunting melodies with Frederik weaving the vocals just right with drummer Thomas Weisnejö adding little bits and pieces throughout. The longest song on the album – “In Memoriam” – clocks in just under twelve minutes. It starts off with keyboardist Olov Andersson playing a stirring theme before the rest of the band joins in with their heaviness. The band adds cellist Daniel Tengberg to add another dimension to the tune.

Torbjörn Weisnejö’s guitar-work on “Where the Story Ends” is marvelous – adding dimensions to the song. The most intriguing song is the last one – “Oh Great City”. This song was on their debut album Fall Babylon Fall. But it sounds quite different from the original version. The opening has an almost middle eastern/oriental vibe. It really adds another dimension to the song, just as we have come to expect from these progressive doom masters.

For their final offering, Veni Domine has delivered another masterpiece for lovers of progressive doom.  Pick this last offering while you still can.

In him we have redemption through his blood, the forgiveness of sins, in accordance with the riches of God’s grace.
Ephesians 1:7

A generous person will prosper; whoever refreshes others will be refreshed.
Proverbs 11:25