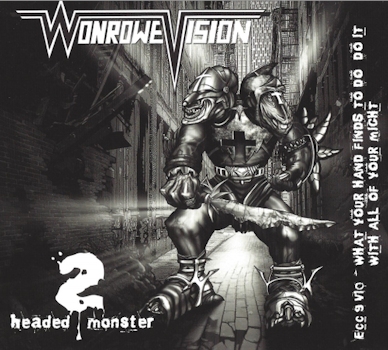 ‘2 Headed Monster’ is Wonrowe Vision’s successor from the 2010 album ‘Mission Invincible’. Not counting the 2013 live album ‘The Pictures Of The Past And Present Future’ with only two new tracks (one of them was a Lightforce track that was re-recorded).

The album kicks off with some bluesy riffs and solid bass-lines that almost has a bit of stoner-rock sound. Wait… what is this…? No grunting or screaming vocals from Steve as on Mortification albums and Wonrowe Vision’s debut album? That’s right.. Steve Rowe decided to record this entire album with clean vocals only.

‘Now Stand’ flirts much more with the traditional uptempo-metal sound of the late 70’s that we heard back on their debut album. It’s a fine piece of rock-and-roll. Unfortunately, that is not the case with every song on this album. The title track ‘2 Headed Monster’ leaves no impression on me. The same can be said about ‘GPS’ where I find the vocals to be almost a bit whiny.

The best tracks on the album for me are ‘Made Of Rock’ and ‘I’m Gonna Be A Good Looking Corpse’. Both of these tracks sound pretty catchy, mostly because of the solid workmanship of guitarist Lincoln Bowen, who saves the day.

All in all, ‘2 Headed Monster’ leaves me with a bit of a bad taste. It has only 9 new tracks and the rest of the album is made-up of live bonus tracks recorded from Steve’s 50th birthday party. Musically, the album is alright. Lincoln Bowen is a very underrated guitarist and deserves a big compliment for his work on this album. Adam Zaffarese and Steve Rowe master their instruments as well. The greatest difficulty I have with this album are the vocals and the accompanying vocal arrangements. Steve is a solid bass player, but I think it would have been the right choice to hire a good vocalist for Wonrowe Vision. It could be the difference between night and day.

Rating: 2 out of 5
Reviewed by: Sieto Kooijker

But the wisdom that comes from heaven is first of all pure; then peace-loving, considerate, submissive, full of mercy and good fruit, impartial and sincere.
James 3:17