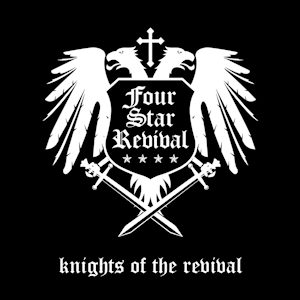 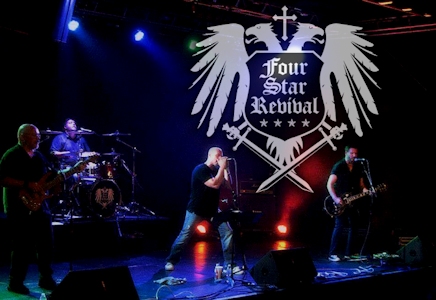 Thank you for hanging with the Metal Pulse Radio rock community! It is great to have you here, Benny!

Thank you for having us!

Can you tell us about Four Star Revival? When did you guys get started? Who is in the band?

Four Star Revival consists of Jack Emrick on vocals, Benny Bodine on guitar, Ed Girard on bass and Eddie Ling on drums. We’ve been together with this lineup for almost a year and a half. Once Jack joined the band, it was like discovering the missing puzzle piece. Everything really came together and grew from there.

Four Star Revival is an interesting name. Does it have any special meaning?

We came up with the name Four Star Revival after reading the biblical story of the 3 wise men that followed a star from the east to seek Jesus in Bethlehem. So essentially, the name just means a revival of seeking Jesus.

How would you describe your music to some who had never heard you guys?

That’s a tough one, as we tend to cover a lot of musical ground between hard rock and metal. But I had once heard us described as having an early 80’s metal vibe with a modern twist.

I see you have a new album coming out soon. Could you tell us about it?

Yes, the title of the album is “Knights of the Revival”. We recorded it over the summer at Refraze Recording Studios in Kettering, Ohio. This is our debut album and features 12 total tracks. We are very excited about the release of this album can’t wait to get it out to the people!

When will the release date be for the new album?

The official release date for the album is November 4th. We will also be playing a CD release show on Saturday, November 8th at The First Heavy Metal Church of Christ in Dayton, Ohio. 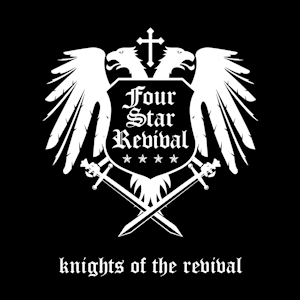 I see that Benny has been posting up a few songs from the new album on Facebook. What has the feedback been like?

The reactions to the songs have been amazing! I think people really relate to Jack’s emotional and heartfelt delivery on songs that deal with the struggles that we all go through in this world, and the message of hope that ties it all together. And the fact that he has such an amazing voice doesn’t hurt either!

When you compose a song where do you get your ideas? How does the song evolve?

Most songs usually start with a guitar riff. We’ll kind of just jam-it-out to work out the changes, until we have a structure we’re happy with. Jack will sing some melodies over top of that and start jotting down lyrical ideas as we go. The bulk of our songs are written this way.

What role does God play in the band and in your life personally?

Jesus is what brought this band together. Ed and I had played together in bands back when we were in high school. We had lost track of each other over the years but reconnected a few years back after finding out that we had both given our lives to Christ. After deciding to put a band together, we then met Eddie at the church we were both attending at the time. Eddie had just moved back to the area and returned to the church he grew up in. We knew we had something special with the 3 of us, but we had trouble finding a singer. After much time and discouragement, we finally prayed for God to either put someone in our path, or if not, we would know that this band was not His will and we would let it go. 3 days later we received a message from a singer saying that he had given his life to Christ in the last year and now wanted to find a Christian band to sing for. It was Jack. The funny thing is that I had met Jack about 7 years before that, when we had tried to start a band together. It didn’t work out and we had lost touch with each other after that. So when he sent that message to us 7 years later, he had no idea it was me. To see the hand of God work so clearly in your life is a wonderful and amazing thing.

When you are playing a show what song gets the biggest reaction?

That would probably be “Red”. Not long after we first joined together we had recorded a 5 song demo. “Red” was the first song on that demo and people really seem to gravitate to that song.

Not letting the world interfere with what we are doing. Always keeping ourselves focused on Jesus helps us combat the outside influence of the world. This is what keeps us grounded and focused on the things that we should be.

What bands did you listen to when you were growing up?

Thank you for taking time to do this interview with me. Do you have any parting words of wisdom for our readers?

Whatever it is that you do, stay focused on the Lord. He will always set you on the path that you were meant to be on.