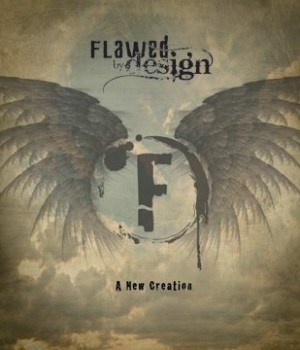 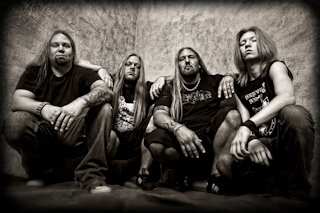 I had a great chance to catch up with some of the members of Flawed by Design talk about the band what is going with the new album.

Can you tell us about Flawed by Design? When did you guys get started? Who is in the band?

Davie – FBD are just four average guys getting together with their talents for the purpose of spreading a message of hope and love that God gives us. Many of the topics in our songs talk about the struggles that the devil and just everyday life throws our way and how with God’s love and grace there is hope for success and a better life.

Shane – Flawed by Design is based out of Hickory, NC. The band started when Tony and I (past bandmates) got together after a long musical hiatus in late 2011/early 2012. Tony had a clear vision of putting together a metal band with a positive message. The line-up is Tony Greer on guitar, Dillon Reynolds on vocals, Davie Huffman on bass and myself on drums.

Lets talk about the name of your band. Flawed by Design what’s the origin of that name?

Shane –The name Flawed by Design is basically saying we are sinners from birth. We are “flawed” from the beginning.

Dillon – I wasn’t around in the beginning when that name was chosen, I always felt that it meant that “we were created imperfect on purpose”

How would you describe your music to someone who never heard you guys? I see you guys put out a 2 song demo this year, What kind of feedback have you gotten from it?

Davie – It’s raw, in your face, hard hitting and melodic, but without getting completely out of control. I like to think of it as a controlled chaos kinda sound lol. I have handed out probably 40 copies of the demo myself and the response has been unreal. I’ve had folks tell me that it sounds like a veteran group that’s been together for 20 years. I’ve even had people that don’t necessarily care for the heavier stuff tell me that they really dig what we’ve got going on.

Dillon – Honestly, we have our own style. Its got thunderous double bass, infused with Groove/Slam riffs that tear your face off, thrown in with heavy bass chugging and a mixture of multiple vocal styles that I do. In some songs all four styles i do are incorporated (clean, spoken word, gritty, and death vocals) all in all, we don’t aim to sound like anyone, but if we had to choose a band, it would be like Pantera with a few FBD changes.

Shane – It’s hard to describe our sound because people want to know “who you sound like” and we don’t exactly sound like anyone. Lol. We are more about groove and power than speed. We call some of our stuff “slam riffs” because they make you want to jump right in the mosh pit. Musically you should be able to hear some throwback influences like Pantera and Machine Head. Our 2 song demo really started building our fan base and we found a lot of support for what our vision was.

What type of recording process did you use? Who produced your recording?

Shane – We worked with producer Jamie King who has been a friend of ours for many years. That gives him some great insight into who we are and what we are looking for when recording. He owns and operates The Basement Studio here in Winston-Salem, NC. He’s worked with over 600 bands including For Today, Between the Buried and Me, Onward to Olympus, etc. He records with Pro Tools and all the other industry standard equipment that I know nothing about. Ha-ha.

Dillon – Jamie King did all of our recording, a total of about an entire week inside the studio and a few weeks for proper mastering. One of the best quality albums I’ve ever heard, and its ours!

How did you guys get hooked up with Rottweiler Records?

Dillon – Haha, well. I had been a die-hard fan of Grave Robber since I was 14 years old and i found out that the vocalist (Wretched/Shawn) was the owner of RR. So when we got our first four song EP back from Jamie King i emailed Shawn and he told us all that he loved it. We eventually sent him a Promotional package with our newly recorded album and after about a month of him having it he said “have any labels bit on it yet? If not Ill bite”. That really marked the beginning with RR, and we are very thankful

Davie – After we finished recording and mastering the album, Dillon sent a couple tracks over to Shawn Browning via Facebook. After many conversations between Shawn and Dillon, Shawn talked with all of us and sent us a proposal and, well, the rest is history as they say lol. We all immediately felt right at home with the Rottweiler pack.

Shane – Our singer came into the band as a huge Grave Robber fan. The rest of us didn’t know at the time that Shawn Browning was in the band or that he had his own label. When we finished recording our demo, we started putting together and mailing out promo packs to labels. Rottweiler was one of the first labels we submitted to and it was awesome when Shawn hit us up and said he liked what we were doing. He was very supportive of us even before we signed a deal with him.. 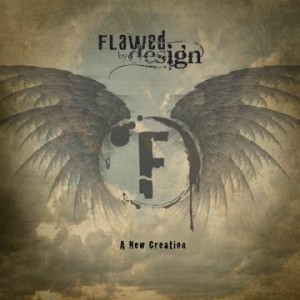 Can you tell us about the new album? Do you have a title pick out? Do you have the art work done for the cover?

Shane – To tell you about the “new” cd is funny because some of the songs are a few years old. Lol. While we are just getting ready to release this cd we are already writing and getting ideas together for the next one. The title of the cd is “A New Creation” it fits us on many different levels. The band is a new creation from our past musical projects and we as individuals are a new creation since we’ve accepted Christ into our lives. We are in the process of getting all the artwork together for release.

Dillon – The new album is a sonic metalstorm that engulfs the listener into the heavy spectrum of Metal, while also bringing a message of salvation to the listener. Its the best thus far! 2. Our drummer Shane has created the album cover

Is Flawed by Design a Christian Band? Or Christians in a band?

Davie – Honestly, we don’t really like to call what we have a band. We consider it a ministry and that’s really the way we try to approach things. Yes, we are musicians that come together to create the best music possible, but the message is what we are more concerned with. We feel that we can reach so many people with a positive message via music.

Shane – When bands come out singing about satan, sex and violence they create a lot of controversy. I find it hilarious that when a band comes out claiming to be Christian and wanting to promote a positive influence that they are often met with the same controversy. Ha-ha. With that being said, Flawed by Design is a Christian band.

What has been your biggest challenge as a band? Have you been able to overcome that challenge? If so, how?

Dillon – There are always challenges with any band, whether it be drama, failure to meet certain criteria, not being on your A Game. Thankfully we haven’t ran into anything impossible yet. We are still rocking

Davie – maintaining some sort of schedule so we can make progress. We all work jobs and have families, so, things come up all the time that just overcomes us and prevents us from getting together on a semi regular basis lol.

Shane – The biggest challenge to start with was keeping band members. Lol. We’ve had a few bass players and several singers before solidifying this line-up. I believe something unique that we face is keeping God and family first. We love this band with all our hearts but we can’t allow it to consume us completely.

Who are your favorite musicians? Groups? CD’s?

Shane – I’ve been influenced by many musicians and bands. Too many to list but early on I really liked Lars Ulrich and more recently Joey Jordison. As an old school metal head, I still listen to everything from Kiss and Pantera to Demon Hunter and Love and Death.

Shane – We just wanna say thank you for this opportunity and we hope you enjoy the music!

Dillon -Thank you for giving us this great opportunity, its beyond exciting and thrilling!

Davie – I’d like to just say thanks to God first of all for bringing me to thus point in my life with these guys. Its really been a blessing thus far to be able to my talents for Him and His message of love and hope. I spent so much of my music career trying to do things my way and that got me into tough situations. One of the biggest things I’ve gotten out of FBD is to just let go and let God. Christians forget sometimes that God is always in control and will guide us down the right path. We just have to get out of His way and let Him work. Thanks to everyone for their support of FBD and I can’t wait to see what God has in store for us!!!