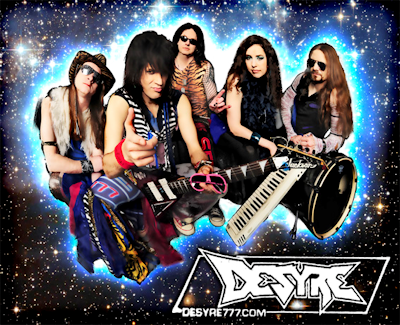 1.Can you tell us about Desyre? When did you guys get started? Who is in the band?
The very first Desyre incarnation materialized in 1998, when the vision (with the name) came to me. At the time I was the only one in it, but the vision about a BAND was very precise and quite clear. I just had to pursue it.

Also, I guess it’s essential to the story to let you know that at least here in Finland the late 90’s musical vibe in general was very melancholy. This bothered me badly. I found myself longing for some “happy summer/good times – rock’n roll” more and more and wasn’t getting any. Something in the vein of Rage Of Angels or Stryper.

So, guess what happened? One night our church’s youth group parked itself at one of the girls’ home after the Saturday evening Bible study, and everyone was laughing together and watching tv and what not. I was kind of in my own world, so I isolated myself from the gang once again. I went to check her CD-collection and found many forgotten treasures from my childhood. I had dismissed them when I dove into the heavier stuff of Mortification, Tourniquet, Deliverance, Discarnated and Betrayal among others. At that time it was a code of honor among us Christian metal heads (in our area) to listen only to white metal. And I have to stress this, I still do love all that stuff. Go white metal! Stryper had made very strong mark on me from the day I first heard Soldiers album and especially the song First Love, which triggered me to grab the guitar in the first place.

My motto is: “No one can be a better Desyre than we are. No one can make the highlights OR the mistakes as we make them!”

Anyway, I borrowed all the 80’s Bon Jovis she had and started my journey to a memory lane. I was in tears when I heard Livin’ On A Prayer after so many years. It suddenly dawned on me that Bon Jovi’s Slippery When Wet was the first complete rock album that had changed my life. That and Europe’s Final Countdown… and also the first Samantha Fox album. From that point on, I knew I was called to do that kind of stuff musically. I just knew it.

I see Desyre plays Glam & Hair Metal. I know it was big in the 80`s and early 90`s. So my question is, in 2013 how do people respond to music that hasn’t been in style for the past twenty years? Is it big in Finland?
That’s a good and valid question. It seems to be quite popular thing nowadays. Here in Finland as well as a global perspective. We do now have successful bands like Steel Panther, not to mention the reunions of many of the REAL 80’s bands. But in ’98 when I started to walk this path, no no.. Hahaa, I couldn’t find anyone to complete the line-up in several hungry years. It was a long road.

Do you have a big following playing Glam & Hair Metal?
Well, it’s hard to define a big following. Internet-wise it’s a different ball game. In our “real life” We have some following, but we are here in the small country of Finland. We are an independent band with no label, but We seem to have something going on, though. People have come after the gigs to tell us many nice things. It’s very nice to hear that we’re an influence to some. On the other hand, it’s a different thing to hear that we suck big time, hahaa! But that’s normal. We’re not perfect. My motto is: “No one can be a better Desyre than we are. No one can make the highlights OR the mistakes as we make them!” 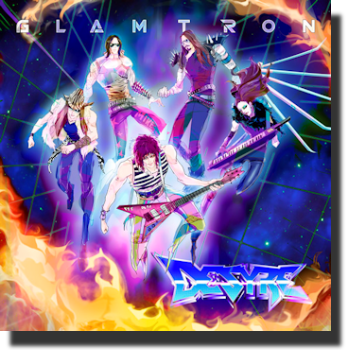 I see you are working on your new album called Glamtron, who is the main writer for the band? When is the release date for the album?
On Glamtron, there is no main writer, perse. On the debut album I was the main writer, but I bugged the band to write also and they didn’t. Actually, on Glamtron we have a trio, which is me, Lady Soundwave and Jayce Prime. There are some collaborations and also some pieces that were written by a single person. Most of the lyrics are from my pen. We are aiming for this summer to release it, but no exact date has been set yet.

Your last album was “Warning of the Night” that was put out in 2009. Why wait 4 years to put out Glamtron?
After “Warning” we took few (ok, seven) steps back to evaluate our stuff and realized that we are at the crossroads here. Let’s not walk that same road again, but let’s update the sound. We were fortunate enough to get Lady Soundwave on keys and then it was time to invent a new style for us. This is no more “just” glam metal. It’s glamtron metal. Now we are even more 80’s than we were before. I think you’ll find out when you first listen to the new album. Also this album is fresh.It’s nostalgic but it has something very fresh in it. And I thank God for that. Literally.

How did the band came up with the name Glamtron for their new album?
Funny story. In our debut album, I made a bogus claim on the cover sheet that “Desyre uses exclusively Glamtron® vibe” on the album. We then decided that Glamtron is very cool and different title. Let’s use that one!

Is Desyre a Christian Band? Or Christians in a band?
We are all followers of Christ for sure. I guess, if you want, you can call us a Christian band if you read the lyrics. I’m not too enthusiastic about the labeling, though. But that’s just me. I mean, look at U2 for example. Or Lenny Kravitz. They have both sang about God (in a good way) but are not labeled as Gospel or so. You know. It’s a crazy world. Don’t get labeled.

What is your definition of Christian music?
This is very large area. I’m not sure how much space do we have here? I love some of the CCM stuff I have found in my (more innocent) days of youth, and also at this time around (being older). Back then everything was very black’n white. Either you were a Christian outlet or a secular one. The older I get, the more I realize that God in His greatness has spoken to me thru every kind of music. Oddly, mostly thru “secular stuff”. I do love my dosage of the in your face boldness in the lyrics, but that’s not for everybody. I think the Christian artists also have the freedom to do the kind of art what comes from their heart. Sometimes it’s very annoying to hear things like “there wasn’t enough Jesus in their lyrics so they must’ve been backsliding or something”.

Thank you very much for your time. I am really looking forward to hearing the new album. Yes, I am a hair metal fan and loved your last album, “Warning of the Night”. Any final words?
Thanks bro! I’m glad to hear that! My final words are to be the following:
Seek first the Kingdom of God and all the rest will fall in line. I can not stress enough what a blessing it is to have the Creator Of The Universe on our side and loving us. Jesus Christ is so, so, so much more than we can ever understand – while walking on this Earth anyway. I say, Glory To God!