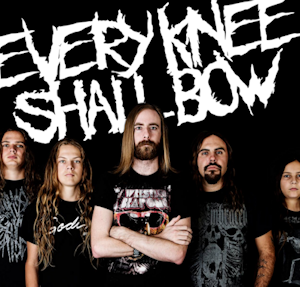 Interview: Every Knee Shall Bow"/>

Interview: Every Knee Shall Bow
By: Dale Huffman 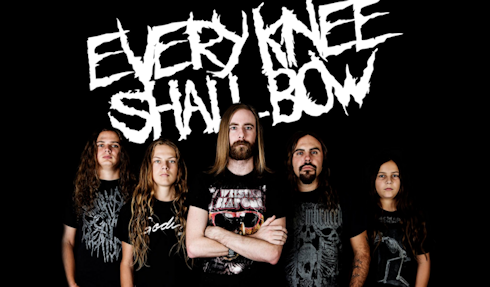 How would you describe your music?
Our music is Christ filled heavy metal, consisting of many genres of metal, from death metal, to metalcore, to thrash metal.

How did you guys get hook up with Rottweiler Records?
We played a ton at Cornerstone 2011 and generated a buzz about us there. A friend of Shawn’s told him about us and he got in touch with us. After talking for a long time and prayerfully considering our options, we decided to sign with Rottweiler later that year.

Your freshman release “SLAYERS OF EDEN” is out now, How is it doing? People love it? I love it and  often play a few songs from the album on Metal Pulse Radio!
The release is doing pretty well. We get a lot of awesome feedback on it. And have even received reviews as high as 9/10 from various people.

Could you briefly describe the music-making process?
It starts with Cole and Drew writing riffs, Cole is basically a riff machine. They’ll get together and refine what they’ve come up with, then they start to structure the songs. When that happens they’ll show all of us what they’ve come up with and we’ll all work together to decide what’s best for the song. Then I spend hours writing lyrics and fitting them to the song as best as possible once we have the structure completed.

Is Every Knee Shall a Christian Band? Or Christians in a band?
All our songs have a strong, positive Christ based message. We are also all Christians. So you could say both statements are true.

How do you share your faith with your fans?
We are focused on being God lead in this. Some nights God will give me something to say in between songs, some nights someone else has something to say, some nights we play and let God lead people to talk to us. We don’t ever want to force anything, so there is no script. Our goal is to be completely inspired by God when we’re on stage, when we’re with the people who come to our shows, and as we go about our lives outside of the band.

What has been your biggest challenge as a band? Have you been able to overcome that challenge? If so, how?
Money is a huge challenge. Any venue we play is at least 2 hours away, and we don’t usually get paid much for shows around here, so each time we go play the majority of the money is coming out of our pockets. God always provides though. We’ve never been somewhere with no way home, or no way to get to the next spot on the journey. Slayers of Eden was graciously paid for by the brother’s grandparents, my home church Fellowship Bible Church in Longview, Tx gave us a generous donation to keep us out on the road last year. Overcoming this challenge is not something we’re necessarily doing ourselves, but God is overcoming that challenge and keeping us going when it looks like there is no way.

Thank you for taking the time to do this interview. I greatly appreciate it. Any last words?
Thank you! God bless!.