Interview: Mission Of One [Chris Dickens]
By: Janette Ralston 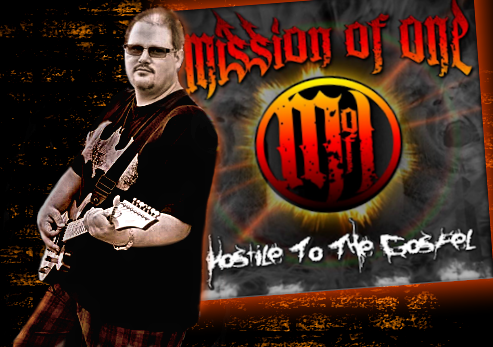 [Mission of One is a unique band that has been in the Christian indie-music scene for quite a few years. 19 years to be exact. Hailing from Watertown, Tennessee, Mission of One can best be described as raw classic-metal with a drive to share the gospel of Jesus Christ through music.]

Hi Chris, thanks for making time for this interview!
I want to begin by saying I am very sorry for the loss of your sister earlier this year. How are you and the family holding up?
Actually, we’re doing good, Janette. While I miss my sister, I know she was a follower of Christ and she is getting to enjoy Him. The pain of loss is still there, but knowing that she is resting in the arms of Jesus makes coping a lot easier.

Losing a loved one is difficult. I’m glad to hear you all are coping well.
Let’s talk a bit about the band. Mission of One has been around for quite a while, could you tell me a little about the history of the band?
Mission Of One started out under the name Missionary One back in 1994. I had written a few songs and recorded them. That was my first demo tape called ‘The Future’s Already Known’. I followed that up with another tape two years later called ‘Rest In Peace’. That would be my last recording for several years.

Why the long hiatus?
I couldn’t find musicians and I was just not interested in making music if I couldn’t play it live. Then, 2003 rolls around, and I realized that I still had more songs that I wanted to share, so I decided to buy my own gear and start my own home studio. I have now released 4 CDs (some with some pathetic mixes). I changed the name from Missionary One to Mission Of One . Without other musicians to help play this live, I just kept my studio projects going. So, it’s become one man’s mission–thus the Mission Of One–to keep making the music that strongly points to Jesus as Lord.

Very cool, and I love the meaning of the name change. I know you just released a new Mission Of One album; can you tell us about it?
Sure! It is called ‘Hostile To The Gospel’ and I have signed with Tate Music Group for distribution. This album has 12 songs on it with a classic hard-rock/metal sound like Bride, Rez, X-Sinner, and MATW. I play all of the rhythm guitars, bass, and did all vocals. I wrote or co-wrote all 12 songs. One song is a remake of the old southern gospel song “Over In the Gloryland’. I had it professionally mixed and then mastered by Pastor Brad of GuitarJams.net. Of all I’ve done, this is definitely the best project I have ever released.

I wanted to put a burning church on the front cover to really symbolize persecution of the Christian faith worldwide. Tate thought it would be too controversial….

Sounds exciting, for sure and I like that you remade a southern gospel song. I noticed the project took longer than you expected.. Why is that?
I always had issues with recording & mixing. With this release, I wanted to take it to the next level and truly sound like a professional release–not a cheaply made demo. I’ve had the honor of playing bass on several tracks on Incarnate’s album and I’ve done a few songs over the years with Liberty ‘N Justice. Both of those bands have an awesome sound. I want to sound that good as well. If you’re going to share the gospel of Jesus with the world, you need to sound your best. So, if I couldn’t get it to sound the way it should, I decided I would not release it at all. Luckily, I had an opportunity to get Jacob Veal (Eden’s Way, Eowyn) to mix the CD and even contribute lead guitar for one song. I took it the opportunity. The result are awesome!

Awesome! Congratulations on working out that deal with Tate Music group, . What have been the positives & negatives so far?
Positives? Well, I can reach a wider audience with a label behind me. Also, I don’t have to shell out a ton of cash to have CDs printed. They are also doing quite a bit of promo stuff for me to help get the word out about the release.

Negatives? They keep pushing me for tour dates that I cannot give them. Not having a band makes it nearly impossible to play this album live. Maybe someday the Lord will see fit to change that for me.

Tate Music Group also pushed you to change your cover-art on the new album.. Right? Why is that?
Yes. With the album title, I wanted to put a burning church on the front cover to really symbolize persecution of the Christian faith worldwide. Tate thought it would be too controversial and might hurt sales if people didn’t know what the song was really about. So, they asked me to change it.

Are you ok with that decision?
Truthfully, yes! We just moved the picture to the back cover and made it smaller. The picture will always be there, but that isn’t the first thing that people see. I think it was probably a good business decision for us.

That seems like a fair compromise. I saw you posted on the Christian Hard Music forum that you were thinking of making ‘Hostile to the Gospel’ a “missionary” work. Can you explain what that means?
I wanted to be able to take a portion of the money I make, if I actually end up making any, to support a cause or charity. Also, I’ve done a few specials where I offered free download cards to people for buying the CD to give to a friend who likes metal but don’t necessarily believe in Jesus.

Oh, that is a cool idea. Speaking of the Christian Hard Music Forum, you are the owner of that, correct?
I am. I’ve had it going for around 10 or 11 years now.

That’s a pretty long time. How did that come about?
I was a member of the Christian Metal Realm (still am). I got mad about something trivial and was going to leave and start my own board. I deleted my account. I got over it in a couple of days but had already built the first CHM site. I ended up going back to CMR and after that made it a point to delete my account every time I got 1,000 posts as a joke to always be a perpetual newbie.
With Christian Hard Music, though, I wanted a place where people who listen to only or mostly Christian music would have a safe place to hang out. With a lot of music message boards, if you don’t partake of the secular music scene then you get slammed for being too legalistic, too self-righteous, etc.. People have become way more accepting of that over the years, but not at the time I started my board. So, it stayed a small board (still is) and became more of a family atmosphere. We don’t get a lot of spammers or have a lot of drama. We just love Jesus and music that honors Him. I think we’ll keep it that way.

I personally have an account at Christian Hard Music Forum and I really do enjoy the atmosphere there.
So. Some bands have special requests in their concert-riders, such as ‘a bowl of green M&Ms must be in the dressing room’. What special request would you make?
Supply a crowd? LOL

HaHa.. Good answer! So now you have to choose: Star Trek or Star wars?
Star TREK. I love both, but Trek has a sentimental place in my heart. The only movie my dad ever took me to see was ST 3: The Search For Spock. I didn’t know what a Spock was or why he was lost! We then rented the first two movies. I was hooked! Then, we started watching original series reruns on a local station. After that, I took him to see all but two of the following movies. I lost my dad in 2009 to two strokes, and this was one of the few things we really had in common was our love for Trek. When Star Trek: Into Darkness came out this year, it was bittersweet because this was the first movie I saw where I could not take him.

Yeah, I could imagine that would be hard. It is nice you had that to connect with him.

As we bring this interview to a close, do you have any parting words to leave with us ?
So many Christians seem to be walking away from their faith. The worldwide church is in crisis as people leave the faith and we are not doing a great job of fulfilling the Great Commission. Churches are emptying or dying completely. Christians are accepting all sorts of false beliefs and even justifying sinful lifestyles that the Bible definitely speaks out against. So, I leave everyone with this final thought from Paul to Timothy:
[2 Tim. 4:1-5 I charge you therefore before God and the Lord Jesus Christ, who will judge the living and the dead at His appearing and His kingdom: 2 Preach the word! Be ready in season and out of season. Convince, rebuke, exhort, with all longsuffering and teaching. 3 For the time will come when they will not endure sound doctrine, but according to their own desires, because they have itching ears, they will heap up for themselves teachers; 4 and they will turn their ears away from the truth, and be turned aside to fables. 5 But you be watchful in all things, endure afflictions, do the work of an evangelist, fulfill your ministry.]

Well said, Chris! Thank you very much for your time. It has been great getting to know you & Mission of One.